Share All sharing options for: The Dish: Another Breadbar, Shin Korean BBQ Open

Welcome back to the weekly Dish opening report. See something we missed? Tips are appreciated. 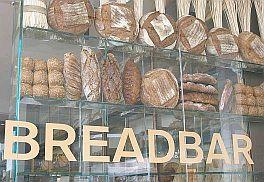 SANTA MONICA: Not too long ago a tipster noticed It's a Grind closing on Santa Monica Boulevard, and now they follow up to say that it's become another Breadbar outpost. "It’s been open about a week now. Apparently it’s nearly the same menu as the other locations with a few less items. Decent sandwiches!" The website confirms. (602 Santa Monica Blvd, 310.395.9490)

HOLLYWOOD: Last year we said 2008 would be all about Korean restaurants popping up in unexpected places, and so far we have Seoul Bros., Jian, Gyenari and now there's Shin. Per Daily Candy, there's gril-top tables, pork belly, spicy chicken and "chef Simon Shin's famous ribs" although we've never heard of Shin and don't know why his ribs are so famous. Voicemail still answers the phone(although it does say the restaurant is "now open"), and the beer and wine license isn't in place yet, so it sounds like they're still getting things together. (1600 N Wilcox Ave, Hollywood, 323.464.4100; website)