Share All sharing options for: The Dish: Verrazano's Pizza, The Fix Burgers, Robata-Ya

Welcome back to the Dish opening report. See something debut? Drop it in the tip jar. 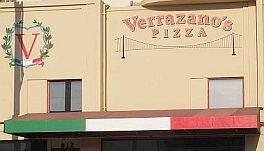 SAWETELLE: For those of you who spotted signage for a new place called Robata-Ya on Sawtelle, here's the info from Mr. Jay Weston himself: "Mako Tanaka from Mako and the upcoming Luau of Bevery Hills partnered with Dennis Mao, the king of Jidori chicken (he supplies Spago, Matsuhisa etc with fresh, never frozen birds alive until that morning). It is basically a grilled skewer restaurant for chicken and beef, with a master grill man from Japan cooking over Japanese charcoal.....as well as pristine seafood, sashimi and grilled fish and shellfish...has about 15 seats and six or seven tables, will soon be open for lunch, and is mindblowing extraordinary." Robata-ya opens to the public on Sunday (9/28) at 6pm. (2004 Sawtelle Blvd; 310.481.1418)

SILVER LAKE: Not to be confused with Fix Coffee that just opened in Echo Park, The Fix gourmet burger cafe opened today. Unlike the Comfort Cafe it replaced, there is no affiliation with the gym next door, which is pretty obvious: Owner Paul Joo tells us they're serving all-natural beef burgers, plus turkey, ostrich and buffalo, fries made in soybean oil, milkshakes, and smoothies. It's pretty much a build-your-own concept with a slew of toppings; a plain burger starts around $6.45 and goes up. No beer and wine yet, but maybe one day soon. Open Mon-Sat, 11am-9pm (2520 Hyperion Ave, 323.661.8494)