No S. Irene Virbila review or replacement in the Los Angeles Times this week (today the "S." stands for "sidestep") so let's look to some of our other critics in town. 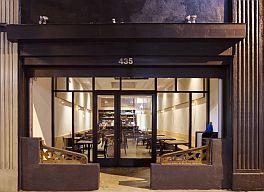 1) Brad Johnson has a review of Animal, Jon Shook and Vinny Dotolo's newish spot on Fairfax, in this month's Angeleno. "These guys cook in a spirit similar to that of Mario Batali or England’s Fergus Henderson (hearty, macho flavors, with no apologies for the excess testosterone), but with a firmer grasp on Americana and a keener appreciation of California’s market-driven sensibilities. The menu changes slightly each day, but one thing you can usually count on is some sort of pork belly appetizer." He's equally wowed with the foie gras-topped biscuit as he is with the delicate amberjack poke, and the wine and beer list is an adventure. Three stars for Animal.

2) Patric Kuh is "on the defensive" with Palate Food + Wine in his September review in Los Angeles magazine, but he still gives it a one-star focus: "Becerra’s cooking has a clarifying effect. The flavors can be full, and a professional efficiency marks the whole...The modest portions help Palate keep its prices reasonable, with entrees topping out at $19, and while the presentations may have a bucolic look—herb flecked and direct—the sauces are individual, often carrying the note of long simmering. Indeed, Becerra’s style is characterized by a careful attention to detail that is in keeping with the artisanal theme."