Have a tip for the EaterWire? We'll take those right here. 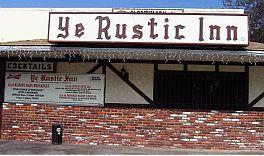 LOS FELIZ: More room for Bloody Marys: Ye Rustic Inn on Hillhurst wants to make additions inside and to its patio, and expand patio hours from 6am-10pm during the week and till 12am on the weekends. That's right, 6AM. There's a zoning board hearing on October 2 at 10:30am for those interested. [Franklin Ave]

DOWNTOWN: Although Seven Restaurant & Lounge opened in April, it just now got its full liquor license, which means it now has reason to stay open later, which means it is now open until 2am on the weekends and midnight during the week. [Angelenic]

EAGLE ROCK: Of course half the fun of the farmer's markets is actually going to peruse the stalls, but for those too busy to stop and smell the vegetables, Auntie Em's now offers the Organic Produce and Dinner Delivery service. For $42 or $62 a box, there are weekly, bi-weekly or monthly deliveries that include seasonal produce, cooking basics and a recipe. You can also order frozen cooked meals from the Auntie Em's menu. Delivery areas include Eastside neighborhoods and Downtown, but Wahl will expand the service in the coming months. [Eater Inbox]