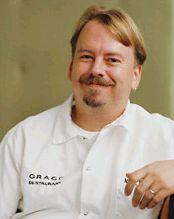 When Cedd Moses took over the beloved Cole's P.E. Buffet downtown last year, there was some worry that the space would be trendified, that it would lose it's 100-year-old patina and vibe, but that was never the plan. Well-worn over the years, Cole's was in desperate need of an update, and with bars like Seven Grand, Broadway Bar and Golden Gopher under his belt, Moses was the man for the job. But by bringing in a chef like Neal Fraser (Grace, BLD) to consult on the menu, he's shown that he's just as serious about the classic French dip sandwich that Cole's is know for as he is about the nightlife.

The story goes that Henry Cole first dipped the French bread in au jus for a customer who couldn't eat such hard crusty bread; other customers saw him do it, so they wanted their bread dipped, too. Thus, the French Dip. So how do you take a sandwich born in Los Angeles---whether it was at Cole's or Philippe's---and update it without losing the value or history? We talked to the chef about the challenge, the menu, the mustard.

Talk about taking on an institution like Cole's.
My take is just not trying to go too far, and I think Cedd is in agreement. I just want to be more or less the way it was, but of course updated. It's still going to be meat and bread on a plate, single or double dipped. Beef, pork, lamb or turkey. Maybe the lamb will be a little more than $10 but the others will be less. The pies will use as much farmer's market fruit as we can. We really want the pies to be great. We want to keep it the way it's been done, not necessarily reinvent things.

What will the sandwich be like? Any significant changes?
I didn't have access to the Cole's recipes, but to me it's all about technique. It's still going to be a handcrafted sandwich. Obviously if you only have three ingredients on a plate, the product has to be good. You can’t cover it with hollandaise or something. We'll try to use the best meat we can use, and I'm going to try and be as sustainable as possible.

What about the condiments and sides?
We'll definitely have a variety of different kinds of mustard—a horseradish, brown and violet mustard. For sides we'll probably do two different kinds of potato salad, probably a traditional coleslaw and a non-traditional, maybe some seasonal cold sides, and a soup of the day. We'll offer anywhere from three to five different pies a day, which will stay relatively consistent but will change seasonally.

Any other new additions?
We'll definitely add things to the dinner menu. I kind of envision a dinner menu with maybe roast chicken, maybe hot sides and entrees, in the same vein as Americana food. Doing the roast beef, a braised lamb shank or beef shank, and some kind of vegetarian dish. It's not going to be $40 but it will be what it has to be.

We think the most important part of a sandwich is the bread. What are you using?
We're going to start off with La Brea Bakery, but not sure we can afford it. It's expensive. You know, we're selling a sandwich for $7.

Any thoughts on Cole's vs. Philippe's?
In the later years, Cole's was probably a shadow of what it was. There was a lot going on in that building in its heyday. But you know, the restaurant was only a half a block away from Skid Row. Philippe's got saved by the neighborhood, and Cole's wasn't as fortunate. But it feels like it's been here for a 100 years. Philippe's is more like Canter's. It doesn't look 100 years old.

Does working on a 100-year-old restaurant get you thinking?
Obviously they did something right. The concept is recession proof, and it obviously a lot of things going on for it. I hope my restaurants don't last that long, though. It's tiring. 20 years sounds good to me.

Cole's is slated to reopen in November, with executive chef Michael Dinon overseeing the day-to-day. The fully restored bar will feature beer and wine, plus signature cocktails Moses is known for. Expect a huge blowout street party to celebrate. We have some plywood tracking here.