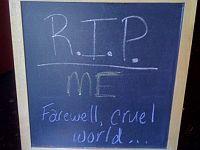 In the same vein as 3rd Street Neighbors vs. Doughboys, Eagle Rock's Colorado Wine Co. tells the tale of the Great Chalkboard War of 2008: "...what began as a surgically precise shift of our sidwalk advertising became a grumble and a swift kick which ultimately left our advertising flat on the ground or facing the store instead of the street every day. Polite confrontations posing questions like "excuse me, sir, why do you do that" and "are you angry at wine?" became pretty heated with quotes like "all you people are only in it for the money!" and "why should I have to walk on the side of the sidewalk! I want to walk down the middle and it's a free country!" The person at war: A neighbor simply dubbed "Mr. Very Angry Irish Man," who apparently has no issue with the Coffee Table sidewalk signage a few doors away. [Cowineco via Franklin Ave]