The Plywood Report sizes up restaurants somewhere in that state between concept and open. Sightings of new new things in your neighborhood to la@eater.com, svp. 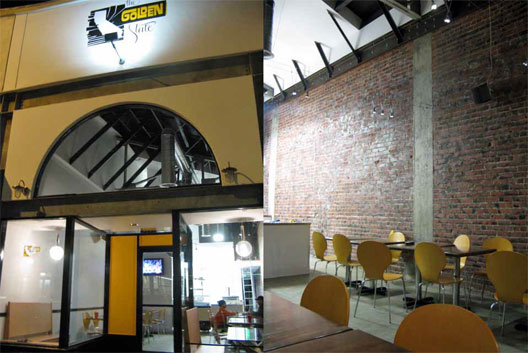 FAIRFAX DISTRICT—Blackburn & Sweetzer serves up a full exterior and interior reveal of Plywood vet The Golden State (above), which we've been obsessing about since June, when owners Jason Bernstein and James Starr targeted an August open. Per B&S, "They’re not making any promises on an opening date, but let’s hope for mid-February." Click on through for more shots from inside. [B&S]

WEST HOLLYWOOD—The estimable Charlie Amter brings word that Venice-based Baby Blues BBQ is getting closer to opening in its new location in the former Cha Cha Cha space at 7953 Santa Monica Blvd. in West Hollywood, hopefully as soon as March. Amter's color: "[Manager Rob] Aguirre said the forthcoming restaurant is larger than the Venice location and has a liquor license. Accordingly, the restaurant will be 'expanding the menu' at the new Baby Blues to include a few choice appetizers such as hush puppies, sweet potato fries and maybe even some fried green tomatoes thrown in for good measure." Yahtzee. [Daily Dish]