Share All sharing options for: Taj India Palace in Westchester

This is the first edition of Dining On A Dime a new bi-weekly feature in which Lizbeth Scordo surveys LA's cheap eats restaurants—often obscure, ethnic, unsung spots—proving that dining on a dime is alive, well, and quite tasty in this here city. 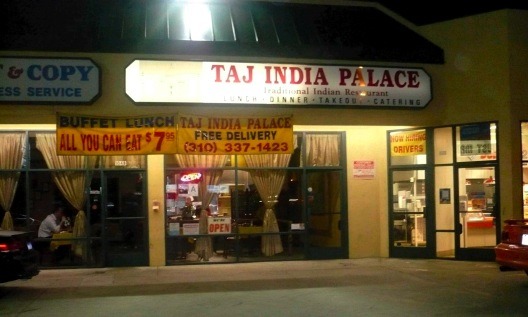 People seem to fall into two camps when it comes to dining in strip malls. There's the group that swears some of the L.A.'s most outstanding cuisine can be found in these often unattractive retail meccas, and the other set just isn't interested in eating in any restaurant that shares a parking lot with a dry cleaner and has its name ablaze in florescent lights. I never gave much thought to the great strip-mall divide, but I recently started to wonder if maybe I'm prejudiced without even realizing it. After all, I love a good meal, but I also give weight to atmosphere, decor, service, and even location. So, for my first report in an ongoing series on inexpensive ethnic eats, I decided to hit up Taj India Palace, an Indian eatery in Westchester I'd heard good things about but had yet to make it in.

This storefront spot on Lincoln, wedged between a dog groomer and a Domino's, is best known for its $7.95 lunch buffet, my waitress told me, which attracts a lot of students from nearby Loyola Marymount University. But, the weeknight evening I visited, there wasn't a student in sight, just a party of six celebrating a birthday and another solo diner. Still, the place felt busy thanks to a parade of locals marching in and out, picking up bags of takeout from two women in saris behind the counter (which is actually the emptied buffet bar in disguise). I took all of this activity as a good sign.

The family-owned restaurant, which has been open for a year and a half, actually felt downright cozy with dim lighting, candles on the tables, murals on the walls, the occasional potted plant, and a statue of a dancing man and woman perched above the dining room.

As for food, the menu was full of the usuals at decent prices. Chicken vindaloo for $8.95, vegetable korma for $7.95, and tandoori lamb kebabs for $10.95. I ordered the saag paneer combination dinner for $10.50, which includes naan, dal, a vegetable of the day (I admit I was wary when mixed vegetables were announced), basmati rice, and a choice of raita or salad (I went with raita). Though I knew it was going to be way too much food, the bargain-hunter in me couldn't resist ordering the $2.95 samosas to start.

It seems the speed of service here simply depends on what the takeout situation is like at the moment you order. I waited 15 minutes after I finished my samosas to get my dinner, while the guy who came in after me hadn't finished chewing the first bite of his appetizer before his entree was plopped down in front of him, clearly to his surprise. But if the strip-mall gods wanted to impress me, they did. Everything I had was delicious. The naan was perfect, the rice was fluffy, the raita was tangy, the dal came with unmushy lentils and kidney beans, the saag paneer didn't skimp on the paneer, and the mixed veggies were far from mysteriously uniform-looking and included big chunks of fresh zucchini, broccoli, potatoes, and cauliflower in a curry sauce. I left seriously full and with a giant doggie bag.

On the way out my waitress gave me a takeout menu touting free delivery. But, I don't think I'll take advantage of it. Returning to my new strip-mall find will be half the fun. 310-337-1423; website
—Lizbeth Scordo