Share All sharing options for: Monte Alban in West LA

Welcome back to Dining On A Dime a new bi-weekly feature in which Lizbeth Scordo surveys LA's cheap eats restaurants—often obscure, ethnic, unsung spots—proving that dining on a dime is alive, well, and quite tasty in this here city. Have a place she just must taste? Drop us a line. 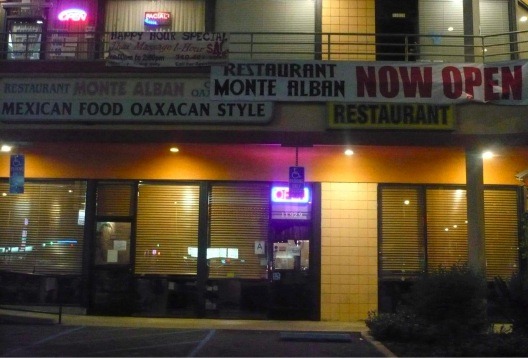 It's difficult enough for a restaurant to stay afloat in the gloomy economy these days, but if the building your eatery is in catches fire forcing you to close down for a few months, well, that could be the kiss of death. Luckily for Oaxacan restaurant Monte Alban, and those of us in search of good cheap eats, it was able to weather the (fire) storm and give me the opportunity to check out the storefront restaurant best known for its homemade mole sauces. The kitschy décor is thankfully still intact. There's a wagon wheel bench front and center, Mexican blankets as tablecloths, and faux stones painted across walls to form archways revealing village scenes (with donkeys and horses and dirt roads, oh my!). Even the drop ceiling has been doused in sky-blue paint and dotted with faint clouds (a post-fire addition). Top it off with the festive Latin music piping through the sound system and it's like walking into a tiny oasis of old Mexico right here on Santa Monica Boulevard. Ok, maybe I'm getting carried away, but you get the idea.

The menu is extensive and slightly overwhelming, and the choices run the gamut from truly authentic items for the more adventurous diner (hello Jonathan Gold) like barbacoa de chivo described as "bowl of goat in broth flavored with herbs and avocado leaves," to the safe stuff like chicken taquitos and cheese quesadillas. I like to think I fall somewhere in between, but I felt lost as to which direction to go. The menu's list of Oaxacan food terms and their definitions was helpful, as was my waitress. She steered me away from the dish touted as the "house specialty," chicken breast in black mole sauce, and instead recommended I get a trio of soft tacos topped with the same signature black mole. As a carb fanatic, I didn't need much convincing to eat anything wrapped in tortilla, so I ordered up two chicken and one cheese.

At this point, I'd already downed half a basket of the perfectly greasy tortilla chips with salsa, so I made the decision to forgo an appetizer, though with items like a squash blossom-stuffed empanada and cactus salad, I'll consider making the sacrifice next time.

Ok, now for the bad news: Monte Alban doesn't serve margaritas. The restaurant does has a beer and wine license, but somehow it's just not the same since Tequila has always been an integral part of my Mexican dining experiences. I did, however, use the opportunity to branch out by ordering a horchata, a non-alcoholic rice drink made with cinnamon, sugar, and nuts. The milky drink comes over ice and tastes just like liquefied rice pudding in drink form. Delicious, but rather sweet and, to me, it felt more like a dessert than something I'd want to have alongside a meal (though I'm sure lots of horchata lovers would disagree). Still, enjoyable nonetheless.

It took just one bite of my entree for me understand how people become obsessed with finding good mole. The black variation (which the menu mysteriously describes as being made with dried chiles, seeds, herbs, chocolate and "up to 30 spices") was slightly sweet, but also smoky and a touch spicy with a bitter finish from the chocolate. I'm no mole expert, but I'll be coming back for this one, or maybe the chicken and yellow mole made with pepper and cumin or the spicy green version. As much as I loved the black, I admit I was jealous when a woman at the next table ordered her tacos with a combination of black and red mole.

As for the actual tacos, they were tightly rolled in handmade corn tortillas, topped with a little crumbled queso fresca and a few cilantro sprigs. I enjoyed the juicy shredded chicken tacos more than the one stuffed with quesillo cheese, which I learned from my handy definition chart is "Oaxacan style string cheese," but I still, of course, ate nearly the whole dish, including a side of flavorful white rice. My mole fascination had my mind racing. I wanted to find out where the owners were raised, where the recipes came from, and maybe even a few of those 30 spices. But the waitress wasn't biting. She told me the owners weren't there and she only knew that they, and the recipes, were from Mexico. And then she gave me a look like she'd seen my newly-hooked-on-their-mole-and-trying-to-steal-the-recipe type before and she wasn't about to fall for that old trick. But, hey, it was worth a shot.
310-444-7736; website
—Lizbeth Scordo