Top Chef Recap: This is Top Chef, Not Top Pussy

Share All sharing options for: Top Chef Recap: This is Top Chef, Not Top Pussy 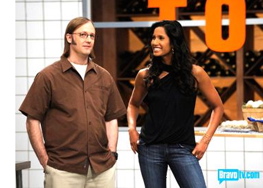 Friends, let us mourn, for last night's episode was the final New York judges' table. Next week it's off to New Orleans for the semi-finals, where Emeril will be sure to kick so many things up so many notches. I wish Danny was still on the show. Then Emeril could be like, "I was going to kick your beard up a notch, but I see it already has two notches and that is more than enough notches for one beard." I also want to make a ton of "BAM!" jokes, but I should save them for when I need them. In the meantime, let's see who is not making the trip to the Big Easy, which is what everyone from there calls that city when they are not yelling "Nawlins'!" or "mon chéri!" (Full disclosure: most of what I know about New Orleans I learned from Gambit in X-Men comic books.)

The show opens with a couple of big reveals. The first is a uncomfortably long and unnecessary Leah down-blouse. This is a family show! I am not sure how her bending over to make her bed symbolizes her struggle to remain on the show, but I guess we just have to trust the producers.

Secondly, we find out that Carla used to be a model. A model! Follow your dreams, guys. One day you too could be a model (really?) and then a caterer. It's basically the plot of An American Tail. Do you know I just realized the other day the main mouse character in that is Jewish? Fievel Mousekewitz. I'm so dumb. I watched that as a kid all the time and was just like, "This movie is teaching me that historically it has been really difficult being a mouse!"

Wylie Dufresne arrives for the Quickfire Challenge, and Hosea says "molecular gastronomy" a dozen times. Speaking of dozens, the chefs have one hour to make a breakfast dish with eggs. (Eggs are often sold by the dozen.) Everyone realizes it's way past the point of just squeaking by, so they do their best to shine. Leah, who came here in a time machine from 2005, says that molecular gastronomy is the new, cutting edge thing in food. Ex-model Carla, herself not a Molegastro fan, thinks "Dr. Seuss!" She's going to make green eggs and ham. I would write a joke about that in Seuss's trademark anapestic tetrameter, but this is Top Chef Recap, not Top Poetic Meter Joke.

Despite using alginate ("of course") in his melon yolk dessert, Dufresne thinks Fabio missed the point. Fabio so upset. "I'm on the freaking bottom for what!" That's what you said, Fabio. Stefan nails his eggs benedict and panna cotta, no doy. And Dufresne especially appreciates how playful America's Next Top Carla is with her dish. She wins the Quickfire! In former House of Style correspondent Carla's words, she is the tortoise in this competition and will win it all. If that's the metaphor we are going with, then I'm pretty sure Stefan has to take a nap under a tree for the next five challenges for you to win.

This week's Elimination Challenge is a biggie. Each of the chefs must cook the last meal (request) for a superstar chef. That's so morbid! "One of you will be eliminated, and the chef for whom you cooked will then have to die. Sorry, guys." Noted fashion photographer Nigel Carla gets to cook pigeon & peas for Jacques Pepin. She couldn't be happier, because her and peas "are like this." Yeah, I don't know what that means either. They are like two peas in a whatever.

The chefs all realize what's at stake. Fabio feels blessed to be cooking roast chicken for Lydia Bastianich. "You just handed to me a big huge freaking deal and it says on it 'You are welcome to the final!'" That deal doesn't sound legally binding, Fabio. Stefan remains cocky in the face of his bald competition. He says you could cut his arms and legs off and he could still run circles around Hosea. I agree, but to be fair, I think you'd more be rolling circles around him, Stefan. And someone would have to give you a kick start. I am trying to think of more jokes, but I'm stumped. (Just kidding, that was one! Because you would be a stump.)

While we're on the subject of injuries, Fabio snaps his finger back so hard. It looks gross! But ever the trooper, he refuses to go to the hospital. "I get so many kick in my ass that sometime when I'm in the bathroom I still pull shoes outta my ass." This guy is such a fucking gold mine. He is a gold vending machine that is broken so you don't have to even put quarters in. I feel like producers feed him American idioms, get him drunk for two hours, then try to get him to remember them on camera. "I got so many stitch in my time, I want to take for a nine iron just to saving everybody."

The judges and the guest chefs are arranged at a long table a la the Last Supper. Clearly Top Chef is trying to capitalize on that current hit novel the Da Vinci Code. Have you heard of it? It's really quite new and great. Tom is Jesus, duh, Padma is Mary Magdalene, and I guess Marcus Samuelsson is Judas? (I saw the movie of Jesus Christ Superstar, I'm no dummy.) What a weird and inappropriate allusion. Not to mention it's all shot with a ridiculously soft focus. These images would make for such sensual boudoir photos.

Despite the simplicity of all the dishes, only Fabio and Carla really please the judges with their roast chicken and squab, respectively. Hosea totally Hoseas up his shrimp scampi, Leah undercooks her poached egg and overthinks her Hollandaise sauce, and somehow Stefan manages to overcook his salmon. I'm really disappointed in you guys. Stefan, especially, is shocked he blew it so hard. He looks like his pet just died. And then he overcooked it.

Fabio's chicken wins the challenge, and the judges can't praise it enough. Tom says that if Fabio had a restaurant with this dish on the menu, this dish would "make him." Woah. Big praise. Leah says she might have given up with a broken finger, but Fabio responds, "This is Top Chef, not Top Pussy." Carla, who used to not get out of bed for less than ten thousand dollars a day, is a close second, though. You know, she's really winning me over, and I'm very glad she'll be in the final four. Do it, girl. Strut your stuff down the runway that is this competition.

Hosea, Stefan and Leah await the judges decision. I honestly can't remember being more nervous! Ever in my entire life. This is the biggest struggle I've ever dealt with, worrying Stefan could go home. But no, reason prevails and Leah is packing her knives and going. She went way further in this competition than I think anyone would have expected, and she should be proud. The guys take their sweet, cheek-kissing time saying goodbye to her. "Can I go now?" Yes. BAM!
— Max Silvestri