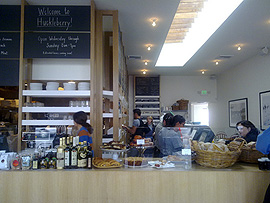 1) Santa Monica: The holiday weekend saw the arrival of a new seafood behemoth, and this morning Huckleberry made its debut. To review, Huckleberry is the bakery venture from the just-married duo of Rustic Canyon owner Josh Loeb and pastry chef Zoe Nathan. The opening of Huckleberry caps off a big week for Team Rustic, who also had a few Beard semifinalists, including a nod for Nathan in the Outstanding Pastry Chef category. Open Wednesday-Sunday, 8am to 4pm. 1014 Wilshire Boulevard; (310) 451-1322; website [EaterWire]

2) Downtown: Little Tokyo Galleria, the replacement for the venerable Mitsuwa Market, has officially opened, albeit with a few changes. From Angelenic: "In addition to undergoing some minor cosmetic enhancements — including new flooring, shopping carts and lighting upgrades — the Korean-owned market is going for a more ethnically diverse selection of foodstuffs while maintaining much of the Japanese drinks, snacks and prepared foods." 333 South Alameda Street [Angelenic]

3) Silver Lake: Hyperion has itself a kebab joint, with "sizzling meat aroma" and everything. According to Eating LA, Cafe Bravo—specializing in Armenian food—has already been packed since opening last week. It's the second Cafe Bravo location. 2662 Hyperion Avenue, website [Eating LA]