Have a bit of intel fit for EaterWire? The tip jar awaits. 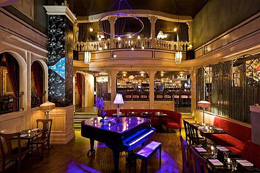 HOLLYWOOD—For you alkies, Ivan Kane has one-upped its earlier special wine deals and is now offering bottomless wine carafes for $15 per person. The move is either a) brilliant or b) could have the makings of a shitshow. [EaterWire]

WEHO—After four years, David Myers has decided to shutter Boule, opting to focus on a new Comme Ça Bakery instead. The LAT says that come summer, the new bakery will be down the street from Boule, right next to his upcoming Ortica sequel. [DD]

LOS ANGELES—When it comes to the annual pre-Oscar festivities, might the recession actually benefit local restaurant this year? Some think so: "'Usually on Oscar night you get in your limo and hop from one party to the next," [a Los Angeles events planner] said, predicting that most Oscar-night events would be smaller and more exclusive. 'If you're a studio with a nominee you're going to have a dinner at a restaurant. Something that's very small and very exclusive. Not large scale parties for upwards of 500 people.'" [AFP]