Top Chef Recaps: Actually This is a Butt Rubbing Contest

Share All sharing options for: Top Chef Recaps: Actually This is a Butt Rubbing Contest 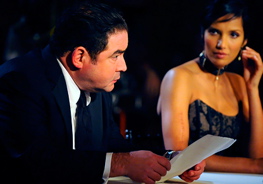 Guys, this is no longer a game. With only two episodes and four chefs left, Top Chef is serious business. Is it even appropriate to still be making jokes about the most important culinary contest of our generation? Well, yes, it is. Now more than ever, you know. The only thing we have to fear is fear itself, and also keeping all one's notes on last night's episode in the Drafts folder in one's Gmail and then accidentally clicking "Discard" and losing all one's trademarks witticisms and observations. Whoops! Let's do this memory-style. We'll be fine. I have Total Recall. (I mean I have three breasts.)

Taped months after the rest of the season, the four remaining chefs arrive in New Orleans, a city with much better food than weather. Carla's straightened her hair *and* her resolve to win this thing. ("Straightened her resolve"? Cancel the Sentence Awards and just mail me my trophies.) Hosea's head still looks like a thumb, and Stefan seems to have been preparing for New Orleans cooking by eating it all. Fabio shows up with a faux hawk and a pink scarf. What a bold statement. He's had literally months to get that outfit together. "It a toof question. Should I a wear pink scarf, or should I a definitely wear pink scarf?" It seems like he's decided.

Stefan hugs Hosea and asks him if he's learned to cook. Ooo, burn. Stefan's practically the Hurricane Katrina of zings, in that he is very devastating and also being used as an excuse to leave low income housing vacant and raise real estate prices for developers by forcing unwanteds out of New Orleans proper. Snap! Sorry to drop such hard science on you guys.

In the backyard of an old plantation house, the chefs meet Padma, Tom, and Chef Emeril Lagasse. But there are only three cooking stations. What could possibly be going on here? Maybe the four of them have to fight for it, Mad Max Beyond Thunderdome-style: four chefs enter, three chefs leave. And then Hosea, defeated, takes off his helmet and is revealed to be retarded. Unfortunately, that doesn't happen. Instead, the last three eliminated chefs, Leah, Jamie and Jeff will be cooking for a chance to go to the finals. That's crazy! No one is happy about this, except Jamie and Jeff. (Let's be real, Leah still doesn't want to win.)

The challenge is crawfish. Leah makes some unappetizing gumbo, Jamie makes an eggs benedict looking thing, and Jeff makes crawfish and grits. They all kind of look miserable. Jeff wins a chance to compete in this week's elimination challenge. He also wins a book by Emeril on grilling, because who can ever afford thirteen dollars. Jeff walks over to get his book and says "Wow, thank you, it's an honor." Come on, Jeff, literally none of those things are true. The weird twist is that while five chefs are now competing in the elimination challenge with two being sent home, Jeff has to win the thing outright to get a chance to go to the finals. Even if he gets second, he still becomes one of the two eliminated. This is confusing, and seems basically like a way to create fake tension for the other chefs.

The chefs check into their swanky hotel and drink some champagne before dinner at Emeril's Delmonico. They get drunk and release some tension. I guess they have a lot of tension in their butts, because I think maybe they start rubbing butts but then Stefan says this isn't Top Butt Rubbing and I think he's right. Much like theirs my memory gets a little hazy around this point. But what's important is that the next day they show up at a weird Mardi Gras warehouse, which seems like the place where insane sad dreams go to die. If there's one thing cooler than parade floats, it's parade floats lying around on the ground under fluorescent lights. Magical! That night the chefs will be cooking for a masquerade ball at the New Orleans Museum of Art. Two dishes and a cocktail, mildly Creole. Already this second to last challenge heavily favors Carla and Jeff, the two Southerners. UNFAIR, guys.

The chefs prep for hours. Stefan seems to have plenty of time for cigarette breaks, and everybody agrees he's getting a little full of himself. (Or a lot full, by the looks of it.) Tom's patience with Stefan's arrogance is wearing thin. Carla, I'm sure, sends lot of love vibes into her food, but she has a 100 oysters to shuck, and according to Tom should have spent her time sending steam vibes into them to open them up. Oh well.

When they arrive at the Museum, they set up their stations. Hosea forgets a whisk! Carla is so helpful. She's really a dream these days. I am pulling for you to get, like, second place Carla! Because I am so giving. Fab uses his hands to train his bartender.

The judges and guests show up for the parties wearing masks! Gail's back. Padma looks very great. Combining "Padma" and "Eyes Wide Shut" in my brain is causing me breathing problems. I hope Sydney Pollack doesn't accidentally strangle her or whatever. The judges and guests make their way around and try everything. Some guest says that one of the dishes is like "a parade in my mouth." Oh, so do you mean the dish is terrible, loud, boring and only for tourists or babies? Perfect. Carla made a non-alc spritzer. Ballsy, but classic Carla. You do it, girl.

At the judges table, they clearly favor Carla and Jeff's dish. Carla's beignet and oyster soup were perfect, and even Emeril was surprised he enjoyed her cranberry-ginger-lime cocktail. But they have nothing critical to say about Jeff's, and I am crazy nervous that he will win. Not just because I don't want to see him in the finals and also because NO ONE deserves a second chance ever, but because that means Fabio and Stefan would probably get eliminated. And that's not cool, everybody. Team Europe 4 Ever.

Thanks be to Tom, Carla wins it. And a Toyota Venza! Oh my god, what a cool and awesome car. Apparently it's one of the top coolest cars on all the lists right now. I'm sure. Fab is disappointed because his car runs on poop, or something. Carla has now won a trip to the Super Bowl and a car? How's that book on grilling treating you, Jeff? Speaking of, as the runner-up, he's going knife packing, a second time. Hosea gets to stay too. It's down to Stefan and Fabio. Man oh man do I not want to see either of them go home. But one of them has to, and it's our favorite meat and English-butchering Italian Fabio. God I was so nervous. I'm sure we'll be seeing a lot of Fabio, though, very soon. (Probably not.)

To memorialize Fabio's passing, here is video of him playing with his dog. If those are his wife's legs, he's doing just fine: