Have some juicy intel fit for EaterWire? Toss it in the tip jar, would you? 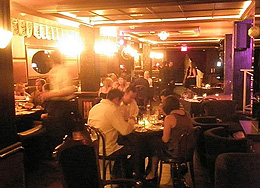 WEST LA—The Westside is finally getting itself a Chronic Taco lunchtime location, according to the Daily Dish. In an unlikely pairing, Chronic Tacos is teaming up with West Coast Customs (“Pimp My Ride”) in ... a Chevron station on Santa Monica Blvd. No word on when an actual branch will open north of Long Beach. [LAT]

HOLLYWOOD—Just in case you missed it earlier, our earlier wondering about Hush Lounge's recent shuttering has been confirmed: both Hush and the adjacent Hudson Bistro didn't make it out of January. The reason given? "Infighting between co-owners." You do hate to see that. [The Guide, previously]

DEATH OF SOCIETY—Newspapers and other publications are folding across the country, yet somehow, Sandra Lee gets her own magazine, debuting on newsstands today: "'I see all these home dec magazines and I think, ‘They’re so beautiful but none of these projects are do-able, and these recipes take 25 ingredients and five hours to make,'" says Lee. “I can look at a picture, because of my product background, and say, ‘Oh my God, you don’t have to do that, you can buy X, Y and Z and it will be done in 10 minutes."' Oh, we'll say "Oh my God" all right. [NYDN via SE]

SILVER LAKE—Tequila aficionados may want to take note of the surprising selection at Acapulco's. Says one tequila superfan: "I was initially going in there to scoff at their selection. Boy the tables were turned..." Full lineup here. [Tequila Net via Eastsider LA]