Notice a recent closure on your block? Operators are standing by. 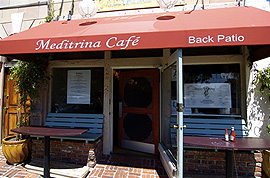 1) Venice: Yo Venice brings some disappointing news from Abbot Kinney, where Meditrina Cafe has unexpectedly and suddenly closed, much to the chagrin of its daytime following. According to fans of the joint, Meditrina had "the best, cleanest and coolest breakfast/brunch around." Fare thee well. [Yo Venice]

2) Orange County: And the recession shutters from the OC keep on coming, with the latest casualty being Aldo's. The family-run Italian eatery had been in business for over two decades, and prior to spending its final three years in a historic space in Old Towne Orange, Aldo's first opened 22 years ago over in Lake Forest. [Fast Food Maven]

3) Downtown: Downtown vegans won't be happy to hear that the temporary closure at Doomie's Home Cookin' has been changed to permanent. The good news is that, according to the restaurant's MySpace page (no, really, people still have those), Doomie's is planning on making a return at some point: "We would like to think of it more as a hiatus as we are looking for a new place to relocate and planning on reopening, hopefully sometime by the end of the year." [MySpace/QG]

4) Hollywood: To file away in the ambiguous shutter category: a reader wonders whether the Hush Lounge in Hollywood is closed temporarily or permanently. Voicemail is still functioning sans any closure notice at all, and last we checked, calls are going unreturned. You'll recall the "supper club" just debuted this past summer; is it down already? Anyone know anything? [EaterWire]
—photo courtesy