Share All sharing options for: EaterWire: The Gold Standard, Another Izakaya En Route

Have a bit of intel fit for EaterWire? Toss it in the tip jar. 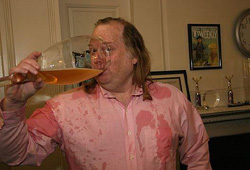 WEST HOLLYWOOD—The lineup of 30 restaurants is set for The Gold Standard evening, hosted by Mr. Jonathan Gold himself and taking place March 8. Tickets are going for $60, but some have spotted a discount that gets you in for $36. [EaterWire]

CULVER CITY—On Washington Boulevard, a few blocks from Lincoln, the shuttered Soban and its curious fusion menu will reemerge as an izakaya/sushi restaurant called Hamakaze. It's reportedly under new management and could return as early as this coming weekend. [EaterWire]

TOP CHEF UNIVERSE—It's safe to say, due to Bravo's own poll and the reactions we've seen all around the internet, that Hosea would not have been the people's choice to win Top Chef. The best commentary on the loss: Gawker commenters who have been live blogging the season. Skip ahead to page 19, where the cursing, Hosea hating, and "throws TV across room" and "worst Top Chef ever" comments become truly entertaining. [Gawker via ENY]