Top Chef Recaps: All Things Must Come to a (Terrible and Disappointing) End

Share All sharing options for: Top Chef Recaps: All Things Must Come to a (Terrible and Disappointing) End 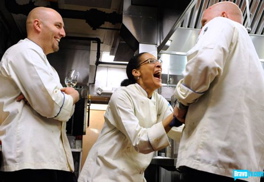 Well, readers, that's it. Another season done. I am finding it hard to type through all my blinding rage. My hands won't stop shaking! Maybe I need to take a Klonopin or something, or maybe Hosea needs to take a cyanide pill. Whichevs! Last night was a travesty, and it almost makes the whole season not worth it. It's like Jennifer Lopez's husband said in Shakespeare's Julius Caesar: "Friends, Romans, countrymen, I come to bury Hosea, not to praise him. Something something, Et tu he's the WORST." Remember that from your high school Shakespeare class? M-Ant was so right. (It's weird more people don't call him M-Ant.) The one saving grace of the episode was that there was lots of cooking and lots of things begging to be animated.

First up, Carla stretching before her big day! Get LOOSE, girl. You are America's Next Top Animated GIF.

The three finalists prepare for the final challenge by eating beignets on a river boat. It's a little awkward. They are nervous and much more interested in winning than talking. Hosea is dressed in sunglasses and a fucking ruthless leather jacket. What an outlaw. What a loose cannon. What a giant chode. He looks like the Chode-inator. "Come with me if you want to chode." "I'll be chode." "Hasta la vista, I'm a chode." Etc.

Stefan is still convinced his food was much better than Hosea's last week. I think he's right. Poor Hosea. Stefan and Carla have their own businesses, but he's like 35 and has a boss and can only afford t-shirts with slogans on them. I sometimes feel a little bad for Ho, but I'm sure he had lots of opportunities along the way to fix things. He could have been like "maybe the first step to starting my own business is to shave my chin beard" but instead he was like "I will work for anyone who will not make me shave my chin beard."

Tom tells the chefs their final challenge: cook the best three course meal of your life. And they'll have some help: past runners-up Marcel, Casey and Richard. The Trailblaiser! I love that guy. Still killing it after all these years. Casey looks like she could squat me. And Marcel is all beard and sunglasses and affected badassness. What a rebel preemie. The chefs draw knives to pick: Hosea takes Blaiserblast, Carla takes Casey, and Stefan's with Marcel. Of Marcel Stefan says, "He's a bit of a twat, but who's not?" Good question, Stefan. You should check out my website TwatOrNot.com.

While the chefs start their prep, Hosea and Stefan fight for the fanciest ingredients in the walk-in. Who will get two things of foie and who will get six things of caviar?! Their food will taste so expensive. A bigger worry is that Carla is letting Casey boss her around. Carla wants to do meat and potatoes, Casey convinces her to sous vide it, and also to turn her tart into a souffle. This woman is a witch! I mean, Carla's a big girl, she didn't have to listen to Casey, but Casey took advantage of Carla's niceness to screw everything up. What is Casey an expert on? "Hey Carla, here's some great advice on how to go to the finals and lose." Really disappointing.

Speaking of witches, the chefs have a brief interlude with a Voodoo priestess or something? Stefan asks about his love life with Jamie. The lady says that maybe his hand is his girlfriend. Ice burn! Stefan also reveals he bought voodoo dolls of Hosea and Carla and stabbed them so many times. All class. Whatever it takes.

Like all good finales, there is a twist. The chefs must make an appetizer with one of three traditional New Orleans ingredients: redfish, crab, and alligator. To decide who gets what they split a King Cake, a Mardi Gras tradition where every Tuesday a bunch of people eat a giant gross cake and whoever gets the piece with the little plastic baby in it has to throw a part the next Tuesday or something. Hosea gets the baby and is going to make Stefan cook the alligator. It's funny because Hosea looks like a giant ugly baby!

The chefs rush to finish their dishes. Carla says it's like the last 6.2 miles of a marathon. Hahaha, oh man, I totally know what you mean. Those last 6.2 miles are such a funny and well-known thing about the marathons we all run. Stefan is wearing cellophane around his neck because he's been doing that in Germany his whole life or something.

All sorts of all-stars show up to eat dinner at Commander's Palace: Fabio, Rocco, John Besh, Ken Burns' Branford Marsalis, a dude who looks like a bad guy from a Die Hard movie, other people. Branford likes hearing chefs talk, because "they talk like musicians." At first I thought he said "magicians" and I think I'd much rather hear a table full of magicians reviewing this food. "And now, for my next opinion, I'll need a volunteer from this plate." Ugh. Gail is looking great in this episode. Marriage is treating her nicely, though she seems to be foregoing eating the food and instead stuffing it into her bra.

The dishes are served. Stefan bungled his fish by freezing it to slice it, while Hosea's raw fish appetizer looks like crayons melted. Carla's sous vide steak disappoints everybody, because it's so un-Carla. And big things happen in the finale course: Hosea chooses venison over a dessert, playing to his strengths, Carla fucks up her (Casey's) souffle, and Stefan takes a risk with an 80's style dessert. It will cost him.

At the judges' table, they have harsh words for Carla being so out of character. She breaks down in tears and breaks my heart in the process. Stefan, the tenderest villain ever, hugs her and I literally wept. Hosea's dishes were consistent, but Stefan's highs were higher and lows were lower. The frozen fish and "pedestrian" dessert were a mistake. Each chef gets a chance to plead their case. Not fair! Stefan's got a language barrier. It's unclear whether a better defense would have helped. The new Top Chef? Hosea.

What a disappointment. The look on Hosea's face and subsequent gleeful "who's the next Top Chef? Oh just little oh me, Hosea" gloating sucked all the joy out of this for me. Stefan's a gracious loser, and he somehow manages to not punch Hosea in the face when Hosea says "You were really close at the end, man" or whatever. No class, Hosea. Speaking of, did you see when Leah ran up to Hosea and tried to kiss him but it got so weird and awkward? Here's a diagram on how of how lamely this season ended.