StarWatch: Gordo at Rush Street, Tyra Banks at the Bazaar, Affleck/Garner at R&D and Many More!

Share All sharing options for: StarWatch: Gordo at Rush Street, Tyra Banks at the Bazaar, Affleck/Garner at R&D and Many More!

You see them eating and they don't care if they see you. Want to submit an item for the StarWatch? You know the number. 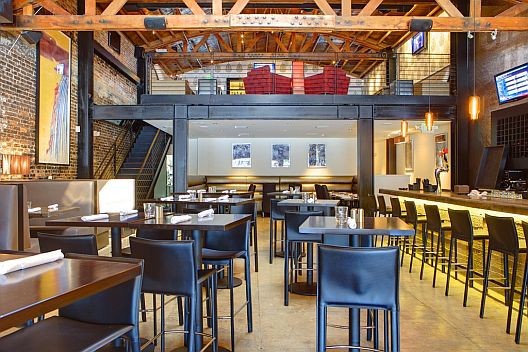 1) Rush Street: Everyone's favorite irascible chef is in town and making the rounds. From the tipline: "Gordon Ramsay was seen on the upstairs patio at Rush Street in Culver City sipping on cocktails with his kitchen staff from Hell’s Kitchen on Saturday February 21st." [StarWatch Inbox]

2) The Bazaar: That Jose Andres is quite the showman: "Tyra Banks was dining with two friends at The Bazaar. Jose Andres waited on her personally and gave her the Dragon’s Breath frozen popcorn demonstration. She moved to the Patisserie, where she watched her friends have dessert." [StarWatch Inbox]

3) Cecconi's: "I think if they put up a Burger King on the sight of the old Morton’s, stars and starf***ers would flock to it. Cecconi’s was packed to the gills last night with industry types and Westside trendoids having liquid dinners. Amanda Bynes, dressed like a high-end call girl with a flock of young and equally trashy-looking friends, and Steve Coogan both buzzed past my table (separately)." [StarWatch Inbox]

4) Lulu's Cafe: "Saw Jeremy Piven plus a ladyfriend at Lulu's Cafe on Beverly for brunch on Academy Day. Guess he's not worried about having squeeze into a skinny tux for Oscars and its afterparties." [StarWatch Inbox]

5) R&D: "Saw Ben Affleck and Jennifer Garner at R&D on Montana Saturday night (2/21). Both looked just like you would expect them to. Were friendly to the few patrons that bothered them." [StarWatch Inbox]

6) Ivan Kane's: "Spotted dining together over the weekend at Ivan Kane’s were sexy Heather Graham, legendary Dennis Hopper with his wife Victoria, director Roger Donaldson and friends in the private dining room of the bohemian getaway." [StarWatch Inbox]

7) Mastros: "Hey there, yesterday, 2/22 my boyfriend ate at Mastros in Pasadena, and spotted both John C. Reilly and his family, as well as Derek Luke with who seemed to be a business associate, probably a publicist or agent... Reilly is much taller and older looking in person, but looked like he was having a nice time with his family and ditching the Oscars..." [StarWatch Inbox]

8) Stone Rose: "We went to a friend of a friend’s birthday party at the Sofitel’s Stone Rose later, where we saw Tone Loc, who told us to 'keep doing the Wild Thing!'" [StarWatch Inbox]