Top Chef Recap: Like Pablo Escobar, This Episode was Rich and Powerful and Full of Drugs

Share All sharing options for: Top Chef Recap: Like Pablo Escobar, This Episode was Rich and Powerful and Full of Drugs 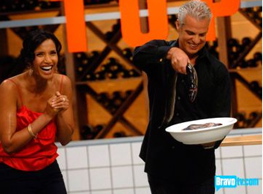 We know we're in the home stretch because Padma arrives avec Eric Ripert. Ripert, in case you are dumb, is the chef at the four-star Le Bernardin, and he gets extra respect from fellow chefs because he's actually cooking in his kitchen most nights and has yet to franchise his cooking elsewhere. Imagine that. Shoot, does anyone remember what New York's best seafood restaurant is? Oh right, thanks for reminding me, everyone on this episode constantly.

This week's Quick Fire tests the chefs' precision and speed with a three round fish filleting tournament. I bet Leah will do great at it because one thing she's proven herself fantastic at is handling fish. She should change her name to Boning Leah because she loves boning so much! Hosea, when he's not reminding us that Le Bernardin is the best seafood blahblah, reminds us that he is "a seafood guy." How embarrassing if you don't win then. Shut up. Carla's hands are shaking because she's so nervous! Or maybe her hands are shaking because she is a Fraggle and the wires used to manipulate her arms are imprecise. Who can know? Who can really know?

Jamie and Carla mangle the sardines and are eliminated in the first round. In round two, Fab leaves too much flesh on the head (that's what no one said) and Leah just plain gives up on her arctic char. Gives up? This is Top Chef, not Top My Hands Are Sleepy. (Huh?) Chin up, girl. You're still in this, barely. The baldies get ready to face off in the final round. Did you know Hosea is the only male American chef still remaining in the competition? It's amazing he's done so well with all those disadvantages. A truly inspiring story. Hosea and Stefan try to psyche each other out by winking and blowing kisses at one another. I am always trying to psyche girls out in bars.

Chef Ripert reveals that round three's fish is a fresh water eel. Though it's dead, its nervous system is mostly alive, so it's still moving. This is so intense. Stefan seems at ease, as apparently, filleting eel is like riding a bike in Germany. I guess when they ride bikes in Germany they nail the bike's fucking head to the cutting board holy shit that's awesome. Hosea has already lost. He looks over at Stefan's station like a puppy dog, a puppy dog who is terrible at filleting eel and didn't realize a spike through its brain was the best way to settle it the fuck down. Stefan wins another challenge. This guy is so great at winning challenges. Instead of the word "challenges", they should call them "Stefans", and also call the show Top Stefan, and say "pack your Stefans and go to Stefan's home" at the end of each episode, and Padma should marry me. These are all just suggestions but take them to heart, everybody.

The next day, the chefs have a lunch planned at Le Bernardin. As Fabio stretches in his top "bunky bed", he says to Stefan "issa pleasure what happened to you instedda my wife." Um, what? Let me parse that. While the cameras were off, Fabio did something pleasurable with Stefan that usually happens with his wife. Maybe they went shopping for pillows? Who can know?

After six delicious fish courses at Le Bernardin, Tom reveals that the Elimination Challenge this week is for each of the chefs to recreate one of the courses. Jamie is grumpy because she doesn't even like that kind of food. That food doesn't inspire her, not in the way sick ink and funky logo t-shirts inspire her. She is basically an artist. She is like if Keith Haring and Stephen Sprouse had a baby and then that baby complained, constantly.

Chef Ripert makes his way through the kitchen to help guide each of the chefs. What a nice guy! Man, he can really do now wrong. Did you ever see his web series co-sponsored by a toaster company? It sounds stupid, I know, but it was still somehow so good and classy and I cooked two recipes he made on it and they were perfect. What a dreamboat. He's kind of above this show. As the judges voice their opinions throughout the meal, Padma and Toby keep nervously and insecurely looking to Chef Ripert to make sure what they are saying is right. At one point, Padma is eating Stefan's lobster with hollandaise and says, "One word I've learned is clumps! I mean, I think this sauce has clumps. And that's good? I mean bad. I'm just kidding. But seriously. Just kidding. What do you guys think? Did you ever see Nutty Professor II: The Klumps? Hahaha wine please!" (That's how you order wine in a restaurant.)

Fabio, Stefan, and Carla are on top. The judges wish they could pick all three as winners, but they don't because this isn't Top Montessori School and everyone can't be the best. Stefan wins *another* challenge, and this time gets a real reward. He gets to pal around with Chef Ripert all across the county. Hey Bravo: please make this a miniseries, thanks in advance.

Hosea, Leah and Jamie face the disapproval of the judges. Hosea knows that he didn't leave his monkfish to rest long enough and how he didn't use the Za'atar correctly. His lack of chef training is really biting him in the ass, because that's something you learn on the first day of Za'atar class in culinary school. Jamie knows that when she reduced the celery liquid, the saltiness intensified. Leah, on the other hand, has no idea how Le Bernardin made her dish and is honestly just stumped. She regrets giving up on the Quick Fire and talks for so long. She's going home, right? Jamie's dish was inedible but it was one mistake she identified. Leah seems out of her element. But I am wrong, as usual, and Jamie's going home. Good-bye Team Rainbow. I honestly thought Jamie, Stefan and Hosea would be the top three. Now? Who can know?
— Max Silvestri
· All Top Chef Coverage [~ELA~]