Have a tidbit for EaterWire? Drop it in this here tip jar. 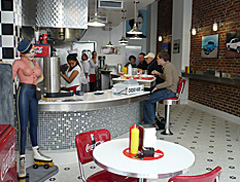 LOS ANGELES—March means tournament time, even in foodblogland, so to mark the occasion, LA Taco is holding a Taco Tournament: "After weeks of consultations, we’ve seeded the top 16 taco places around town ... Spots were chosen for a combination of taste, fame and authenticity." The first matchup pits the Eastside's King Taco against West LA's Tacomiendo. And yes, even Kogi is in the bracket. [Taco]

DOWNTOWN—The Daily Dish has a quick report from the week-old D-Town Burger Bar. Even though the retro diner ran out of food a little prematurely on its first night, things have settled down and perhaps most importantly for you office workers, "the lunchtime wait has so far been minimal." [LAT]

WINE LISTS—The new issue of Wine & Spirits includes the 20th annual restaurant poll of what wines are hot and not. The article isn't online, but Mouthing Off has a quick wrap: "There's been a big shift toward fresh, light styles of white wine over the past ten years (no surprise); Pinot Grigio is drifting off of its recent wave of popularity (about time); and Pinot Noir, for the first time ever, was more popular than Cabernet Sauvignon in the restaurants that W&S surveys." [F&W]