You watch them eat and they try their best to look the other way. Want to submit an item for the StarWatch? Here's the hookup. 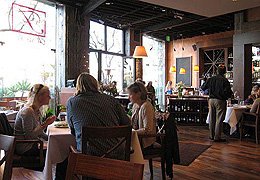 1) Fraiche: Some Hollywood royalty was on the town last week: "How's this for a power table? Michael Douglas, Catherine Zeta-Jones, Oliver Stone, and Ron Meyer doing the full three courses at Fraiche friday night march 6th 2009 - at one point they all toasted something - a new movie deal?" [StarWatch Inbox]

2) TONYS: "Joe Pesci and friends dined on steak and pasta in the owner’s booth. Matthew Perry and a few friends were at the table next to them. Both were very happy with their meals..." [StarWatch Inbox]

3) STK: We suppose she still counts as a star: "Saw Paula Abdul at STK. She must have come straight from Idol results show taping because dinner was at 8pm. She is super tiny and her group of 3 was very quiet." [StarWatch Inbox]

4) Cheebo: "Went for an early dinner at Cheebo on Sunset last night. Josh Radnor (How I Met Your Mother) and Lindsay Price (Lipstick Jungle) were canoodling inside at one of the tables. Then in walks Busy Philipps (Terminator / Dawson's Creek) and her husband Marc Silverstein and their little newborn, Birdie. They were seated outside. When Josh and Lindsay walked out to leave, they saw Busy and Marc and sat down to chat for a while. All seemed to be laughing, telling stories and having a great time. Who knew they all knew each other?" [StarWatch Inbox]

5) Two Boots: "Saw James Franco at Two Boots in Echo Park on Saturday night (March 7) at around 9 PM. He was grabbing a pizza and salads with a couple of friends. He blended in well with all the other hipsters." [StarWatch Inbox]

8) Bitburger: The more we hear about Top Chef alum Stefan Richter, the more we love the man: "A friend of mine ran into Stefan at Bitburger in Venice yesterday, and I think it’s safe to say that he’s just a tad irked about the final results (who isn’t??). To be fair, Stefan was a little drunk when my friend approached him to playfully rib Stefan about losing. Though Stefan took it in stride, he did take the opportunity to set the record straight – at least about one battle. 'You know what? Top Chef is total Hollywood f*cking BULLSH*T!' Stefan said (well, yelled actually but all in good fun). He continued: 'You know that gumbo challenge? I WON THAT CHALLENGE! I got 104 mardi gras beads and Hosea only got 84 but Tom picked him anyway. I got 104! The person with the most beads was supposed to win! It was bullsh*t!'" It's official: guy rocks. [StarWatch Inbox]