The Dish: Magnolia Downtown, The Lab

Share All sharing options for: The Dish: Magnolia Downtown, The Lab 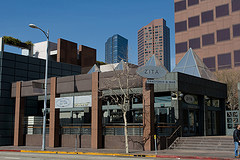 1) Downtown: As pointed out in the comments and Daily Dish, snuck in under the radar and made its debut yesterday. The first offshoot of the Hollywood hotspot takes over the space previously housed by Ziti Trattoria (pictured). The menu is supposedly very similar to the original, and there's even a patio or two involved. 825 W. 9th Street, at Figueroa; (213) 362-0880; website [EaterWire]

2) South LA: With a tip of the cap to today's edition of Tasting Table comes the news that a new (slightly-gimmicky) pub has opened in the USC area. It's called The Lab, which should give you an idea of the bar's theme (beer in beakers, etc.). Early returns on Yelp haven't been too encouraging, but we'd give it some time to get the kinks out before any firm decisions. 3500 S. Figueroa Street; (213) 743-1843 [EaterWire]