StarWatch: Flay and the Hiltons Together at Last, Plus Phil Jackson at Akasha, Famke Janssen at Minestraio, MORE!

Share All sharing options for: StarWatch: Flay and the Hiltons Together at Last, Plus Phil Jackson at Akasha, Famke Janssen at Minestraio, MORE!

Want to submit an item for the StarWatch? Here's the number. 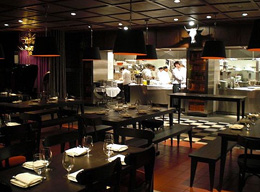 1) The Bazaar: So, last night was quite the star-studded affair at the Bazaar. First, Jose Andres took the time to casually hang out and sit at the table with one Bobby Flay, but then this gem came in: "Not only Bobby Flay but Paris & Nicky Hilton, David Katzenberg, and Paris' new boy toy Doug who used to be on The Hills dating LC and Amanda Bynes. Fox 11 10 o'clock news did a special taped segment with Jose Andres and the anchor Susan Hirasuna failed. She choked on the Dragon's Breath and ruined it for everyone!" [StarWatch Inbox]

2) Cafe Rodeo: "Joan Rivers was at Cafe Rodeo at the Luxe Hotel Rodeo Drive yesterday. She was filming an episode of her new TV show for TV LAND." [StarWatch Inbox]

4) Minestraio: "Famke Janssen at the new re-opening (3/17 @ 8 pm) of La Terza as Minestraio Trattoria. She was dining outside right next to us with her table of 6.5 (0.5 is her boston terrier Licorice)." [StarWatch Inbox]

5) Terroni: "For your Eater Starwatch - I saw Chris Pine (the new Captain Kirk in the upcoming Star Trek movie) dining with two women at Terroni on Saturday night..." [StarWatch Inbox]

6) Fulfilled: Best story of the day: "Jay Alexander (known as Miss J) from America's Next Top Model was at Fulfilled (Japanese Pastries) in Beverly Hills a few days ago. He was there eating imagawayaki at one of the tables inside with his producer. He was very friendly and was nice enough to show us his catwalk up and down the sidewalk in front of the store. I wish I had it on video because it was so hilarious. Also, who knew he speaks Japanese fluently!" [StarWatch Inbox]

7) Kiwami: A tipster passes along word that David Cross and Aziz Ansariwere at Kiwami over the weekend. [StarWatch Inbox]