EaterWire: Ludo's Back, Grace on the Small Screen, More!

Share All sharing options for: EaterWire: Ludo's Back, Grace on the Small Screen, More!

Per usual, your tips and sightings are always welcome to la@eater.com. 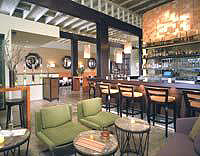 LOS ANGELES—Per LA Mag, Ludo has returned: "After a year in Las Vegas ... Ludo Lefebvre is coming back to L.A ... He hopes to have LudoBites, 'a little bistro where you have good food,' up and running again at the Breadbar on Third Street by mid-May." [LA Mag]

MID-CITY—Restaurant writer/90210 superfan Charlie Amter reports that the show has been filming at Grace: "...everyone already knows that the cast of "90210" films at Kokomo Cafe on Beverly Boulevard. But this morning, I spied the cast and crew filming a scene from a forthcoming episode of the teen drama across the street at the decidedly more adult dining destination Grace." [LAT]

CHICAGO—Celeb chef Grant Achatz may not be coming west just yet, but he's definitely working on a new concept in Chicago. Per his Twitter: "looking for a space for a new concept. Lincoln park and/or bucktown areas." Achatz tells Eater NY the Chicago expansion is not finalized yet, but it will be an "Alinea version of a bakery-coffee-culinary library- music space." If only he could put this energy toward opening a California outpost. [Twitter]

EUROPE—Those Brits are still searching for the cause of the mystery illness surrounding the Fat Duck, but Heston Blumenthal now says they've ruled out food poisoning: "The entire menu was tested but all results proved negative. Final tests are being carried out to see if an airborne virus caused the sickness." [BBC]