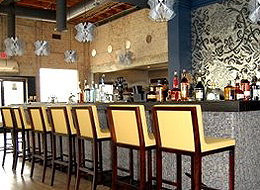 1) Downtown: Another downtown outpost of Famima made its debut on Wilshire today (we're not going to include the exclamation points), and the Daily Dish is enthusiastic about its prospects: "The small convenience mart should be a pleasant addition to nearby office workers' lunchtime options, though it's strictly carryout." Up next for the still-growing chain: one at 727 West Seventh Street. 700 Wilshire Boulevard; (213) 622-2006 ; website [EaterWire]

2) Downtown: Speaking of the 213, last week saw the opening of Yxta Cocina Mexicana, a new restaurant from the folks behind the 40-year-old El Arco Iris on York. Pictured, it's in the old Sixth Street Bar & Grill space on the corner of Sixth and Central, and a look at the menu can be had over at Thrillist. 601 S. Central Avenue; (213) 596-5579; website [EaterWire]

3) Hollywood: Open for the first time over the weekend was Locali. We'll refer you to our sister site Racked for all kinds of fun details about the convenience store that's been dubbed a "cross between 7-11 and the Farmer's Market." Also, Locali has been very active on Twitter. Open daily 7am to 11pm. 5825 Franklin Avenue; (323) 466-1360; website [Racked]