Welcome back to the Plywood Report, your chronicle of LA's next generation of restaurants and bars. Notice some plywood on your block? Do let us know. Bonus points and gold stars if you include photos. 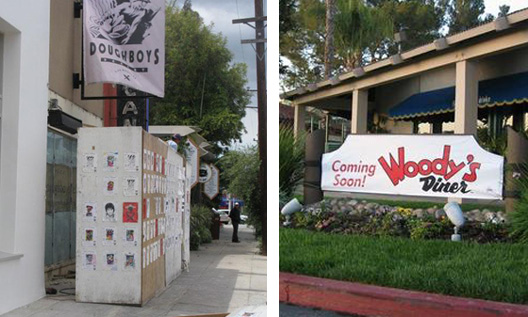 From left: Doughboy's (via B+S) and Woody's Diner (via Stick a Fork)

1) Mid-City: Blackburn + Sweetzer notices some new movement on West 3rd, where fresh plywood has been erected at the old Doughboy's location after that whole saga. [B+S]

2) Silver Lake: Several folks have submitted sightings regarding all kinds of activity—construction, workers, signage—at 2866 Rowena Avenue, off Hyperion. It's called Silver Take, and according to the website, will be a neighborhood kitchen/cafe specializing in Mediterranean dishes and the "best coffee in town." [PLYWOOD]

3) Laguna Hills: Stick a Fork In It brings word of a restaurant shuffle at work down in the OC. Next week, Woody's Diner will open its fifth SoCal location in the space that last housed Islands. [Stick a Fork In It]

4) Hollywood: Finally, a reader writes in with a plywood mystery: "Any one have word on the restaurant going up on melrose next to (Osteria) Mozza? It looks to be a smallish space and the only signage is for the contractors... I walked by this morning and they've installed a pizza (?!?!?) oven. Could Mozza be expanding to take out??? Or is someone really opening a pizza place next door to Mozza?" Update: ok calm down, it's the aforementioned Mozza takeout window, getting closer. [PLYWOOD]