As always, let us know if you spot some fresh plywood on your block. Bonus points and shiny gold stars if you include photos. 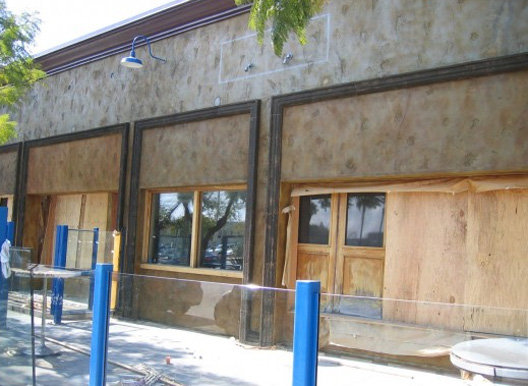 1) Culver City: Don't look now, but plywood regular Kay 'n Dave's just might be getting close to a grand debut. They are currently hiring, and word on the street is that there was a nice crowd of applicants there on Monday evening. [POST-PLYWOOD]

2) Santa Monica: Right across the way from Bar Pinxto, Pourtal should be opening in a few weeks. The sign is up and the interior is almost done. According to its chef David Bowless, they'll be serving mostly small canapes/tapas, but with a more Mediterranean vibe than their pinxto neighbor. Also, since there's only an oven in the kitchen, the menu will consist of mostly raw items. [PLYWOOD]

3) Santa Monica: Vegans, rejoice even more than you usually do: "Noticed another new restaurant/cafe in the making on Wilshire between 10th and 11th just down the street from Huckleberry. The Golden Mean, a vegan cafe. In the space that was previously an unsuccessful coffee /crepe shop and long before that, Anastasias Asylum." [PLYWOOD]

4) West Hollywood: But that's not all. A tipster point out that there's a newish change of ownership/liquor license application at the old Kiichi Japanese restaurant in West Hollywood in the strip mall across from Marix and Basix. The DBA is Green Leaves Vegan. [PLYWOOD]

5) Santa Monica: Also hiring is La Grande Orange, which is still looking at an April debut. From the inbox: "I drove past today and saw a throng of people outside. A sign read 'now hiring.' Opening soon, perhaps? looks like they still have a lot of work to do inside." [POST-PLYWOOD]