And now, this week's celebrity sightings from LA's dining landscape. As always, you can submit your own items to the official StarWatch Tipline. 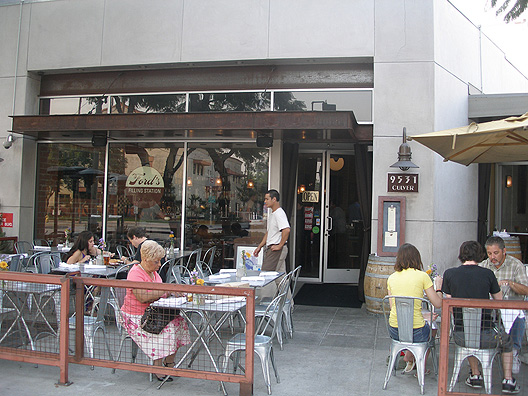 1) Ford's Filling Station: Before she headed up to Sacramento to plant an edible garden at the Capitol alongside Maria Shriver and company (hey, Guy Fieri was there too), Alice Waters was in town. Along with three guests, the Slow Food matron did dinner at Ford's Filling Station on Tuesday night. Per our spy, they had cauliflower flatbread, Kobe beef cheeks, and the red leaf salad. The connection, of course, is that chef/owner Ben Ford had previously worked at Chez Panisse for Lady Waters. [StarWatch Inbox]

2) Zucca Ristorante: Speaking of politics, Joe Biden was in town recently too, and one of his stops was lunch at Zucca, Joachim Splichal’s Italian joint downtown. Reportedly, lots of paparazzi were on hand too, snapping photos of the veep. [StarWatch Inbox]

3) The Grill on the Alley: Tyra Banks with a friend was spotted there for a late weekday lunch and later in the week, Dustin Hoffman popped in for "a quick nibble at the bar – in and out in 20 minutes." [StarWatch Inbox]

4) Villa Blanca: After an idol taping (not the finale), Simon Cowell dropped into Beverly Hills newbie Villa Blanca. Quoth a tipster: "Simon [was with] UK Billionaire Sir Philip Green and his wife as well as Villa Blanca owners Ken and Lisa Todd. They had dinner and were drinking an expensive bottle of Mouton Rothschild until late into the night." [StarWatch Inbox]

5) Morels: Fresh off his game one victory, Los Angeles Lakers owner Jerry Buss was spotted dining with friends at Morels French Steakhouse and Bistro at the Grove. [StarWatch Inbox]

6) Amici: Vogue overlord Anna Wintour got all kinds of headlines at Tavern this week, but at nearby Amici Brentwood, there were C-listers like Kevin Bacon, Jim Belushi and Michael Keaton. So there's that. [StarWatch Inbox]