Have a tidbit or two for EaterWire? Drop us a line. 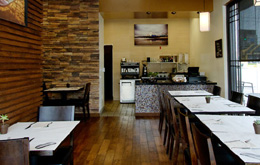 MID-WILSHIRE—Pat Saperstein shares some rumors that after just two months open, Umami Burger might be ready to expand to neighborhoods like the Westside, Hollywood and/or Silver Lake. Also coming soon to Umami: lobster rolls. [Eating LA]

WEST HOLLYWOOD—A poor valet at Cecconi's is responsible for crashing Lindsay Lohan's Maserati. This would have never happened at The Ivy. [BB]

MOBILE FOOD—We mentioned the Coolhaus truck back in April, and The Digest reveals a few more details on the ice cream truck itself, namely that it's going to run on ethanol, use solar energy, have a fold-down bar, and a portable patio set-up for people to hang out. [The Digest]
[Photo: Umami Burger]