StarWatch: Magic at Pink Taco, Rogan at 8 Oz, Jake/Reese at Tavern, and More Sightings From the Week!

Share All sharing options for: StarWatch: Magic at Pink Taco, Rogan at 8 Oz, Jake/Reese at Tavern, and More Sightings From the Week!

Welcome back to StarWatch, your ongoing chronicle of celebrity sightings from across the L.A. dining landscape. Want to submit a sighting yourself? You know the number. 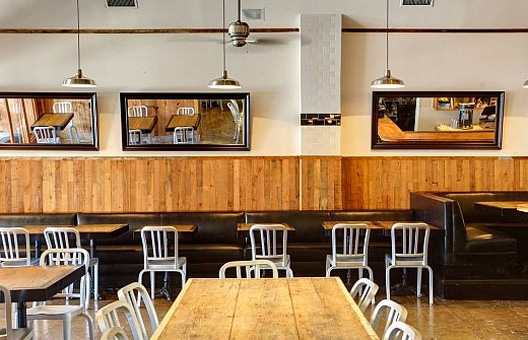 1) 8 Oz: Quoth a tipster: "Saturday lunch saw Seth Rogen in a corner both at 8oz when we got there, then he left and about 20 minutes later Jonah Hill came and sat in the the same seat...It was like a rehearsal for the Vanity Fair cover." [StarWatch Inbox]

2) Pink Taco: Live from Century City! Hot off the tipline: "Magic Johnson and guest is having lunch right now on the patio of Pink Taco Century City." [StarWatch Inbox]

3) Chaya: The downtown outpost might be getting the buzz lately, but Jamie Fox was spotted in the lounge at Chaya Brasserie this week. Also, separately, Zac Efron had lunch there too. [StarWatch Inbox]

4) Amici Brentwood: Per a tipster, Robert Redford was at Amici Brentwood earlier this week. The added color: "with a middle-aged woman; couldn’t tell what they were eating." [StarWatch Inbox]

5) Tavern: Everyone welcome Suzanne Goin's new Brentwood heavyweight to the StarWatch stage: "Had dinner at Tavern on Wed, May 6. Jake and Reese were there!!! As was Suzanne Goin!" [StarWatch Inbox]

6) Providence: From the comments: "Brad Pitt, Courtney Cox and David Arquette at Providence last Sunday. Having dinner together and at the bar before going to the Chris Cornell concert later that night. Brad and Courtney were talking together the whole time!" [Comments]

7) Benihana: We've got to think that celebs might be a little embarrassed to be spotted at Benihana, yes? "Last Thursday at Benihana in Beverly Hills......Bobby Lee from MadTV and at the same time.....Kate Bosworth with her boyfriend James Rousseau (sp?)" [StarWatch Inbox]

10) Grill on the Alley: Via the Beverly Hills spot: "Busy week with sightings – Monday saw Judge Judy at one table, Samuel L. Jackson at another, and Anne and Arnold Kopelson at yet another. Tuesday saw George Hamilton at one table, The Unit’s Dennis Haysbert at another, and MSNBC scribe Chris Matthews at a third table." [StarWatch Inbox]