Welcome back to the Plywood Report, your ongoing chronicle of the next generation of restaurants and bars to hit LA. Spot some fresh ply on your block? You know the number. 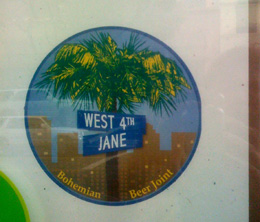 1) Santa Monica: It didn't take long for someone to claim the shuttered Three on Fourth storefront. From the looks of things, the space at 1432 Fourth Street will apparently become West 4th Jane, a "Bohemian beer joint." The liquor license application doesn't have any further info, other than the licensee name, "Apple Core Group." Anyone? [PLYWOOD]

2) Hollywood: The most entertaining milkshake shitshow in all the land is getting a new neighbor! A tipster on the scene reports that Pizza Rustica is moving in next door on Santa Monica Boulevard, in the space that used to be "some weird consignment clothing store." According to the official site, it'll be the fourth LA location for the "South Beach gourmet pizza" chain. [PLYWOOD]