Share All sharing options for: StarWatch: Heidi Klum at Grace, Legz, Kimmel, Ulrich, and Connolly all at Sushi Park, MORE!

Welcome back to the weekly StarWatch where we unveil restaurants of choice for this town's myriad A-to-Z listers. See a celeb at your favorite noshing ground or watering hole? Lay it on us right here. 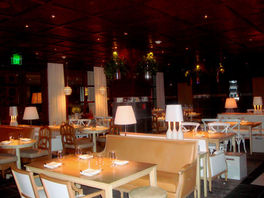 4) Jones: From a tipster "David Bowie seen with a twenty something gal talking about WW2 on Thursday June 4." [StarWatch Inbox]

5) Lago: On the heels of his Hollywood Bowl concert on Sunday and headed for Chicago, Andrea Bocelli stopped by with his wife and a veritable entourage for a leisurely round of espressos. [StarWatch Inbox]

6) Hungry Cat: Conan and Mrs. O'Brien sauntered in about 8pm Friday (6/5). The pair was friendly but subdued, and several patrons did pay their respects including former Talk Soup host John Henson. [StarWatch Inbox]

9) Royal/T: After taking a gander at the exhibition I Cant Feel My Face, Adam Lambert opted for the cafe's spicy tuna tartare and a bottle of agua.