To welcome back the real Top Chef, we welcome back comedian
Max Silvestri, who will be here every week to take us through season six. 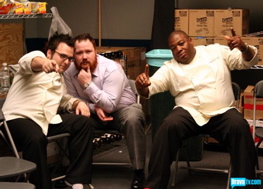 The top of this week's episode wastes little time with pleasantries. Does Eli mold his hair into a faux hawk? We can only assume. Do the contestants miss Preeti? I don't know. But I imagine the other chefs are confident she is somewhere out there, being a hero, making tuna salad for all our firefighters working in spider holes. Let's (eat this tuna salad on a) roll.

Legendary Chef Daniel Boulud, "one of the baddest mothers there is" according to Eli, is our guest judge this week. Everybody's awed because he is French and famous and very successful. Did you know that he has a restaurant in Las Vegas? In case you forgot, do not worry at all. The show will remind us every 15 seconds with a cut away to the sign above the restaurant door. Seriously, they showed that about 900 times. We get it! I PROMISE to take a vacation there and give him all my money and then take my leftovers home in Gladware and then make soup with Diet Dr. Pepper. Just give it a rest.

Tom tells the chefs that this is a high stakes (see: Vegas) Quickfire with snails, so it's not just about winning, it's also about the opposite: whoever loses this week's Quickfire will have their house taken away by the bank and will have to marry a cocktail waitress who puts on makeup like she's going to war. (Soldiers wear a lot of makeup.) Oh, also they have to go home. A double elimination episode! This is my favorite kind of episode because two bad people go away. They have 45 minutes to make snail magic.

Everybody is in a panic in the kitchen. Ron keeps yelling, "Where my snail?" And it is a good question, guys. Where his snail? Jesse, the Mayor of Bottomtown, is in a "bog of self doubt." Isn't that where Artax dies in the Neverending Story? I wish Jesse was in a Swamp of Being Better at Cooking. But she's not! The judges ask what her inspiration is for her ELT, and she says "I have no idea." Good answer. Tom, perhaps feeling pressured by the refinement of Chef Bouloud sitting next to him, eats his dishes with his pinkie out.

Daniel's favorite dishes are Mike's, Kevin's and Jennifer's. Mike is so excited that they enjoyed his taste of Crete that he makes fun of women in his mind to celebrate. But Kevin's southern-style snails and bacon jam takes the prize. Dude is already a legend. What a viking. David the Gnome's all grown up and just killing it on a weekly basis.

But there are three losers, too. One of them will go home! Ashley, Jesse and Robin get twenty minutes to make one amuse bouche to save their lives. This is the cooking version of 8 Mile. If you had one shot, or one opportunity, to make a tiny soup, would you put a crouton in it? That's what Eminem rapped, remember? Anyway, Jesse is not Eminem here. She loses, and she's going home. "The thing I want people to know is that I don't suck this bad." You suck worse? Or slightly not as bad?

The rest of the chefs draw knives for the Elimination Challenge. Each is assigned a protein or a classic French sauce. They pair up, except for Kevin, who in addition to immunity gets to eat at this dinner instead of cook it. And he's eating alongside some of the most important French chefs in the world: Laurent Tourendel, Daniel Boulud, Monsieur Je M'Appelle Eiffel Tower, Madame Gail Simmons and #1 Undefeated Chef of the Century Joel Robuchon. Now everybody really craps their pants. There is crap everywhere!

In the middle of all this, Mattin celebrates his 29th birthday in the Frenchest way possible. He's got no shirt on, red briefs (to match his neckerchief), cake on his face and wine in his veins. He almost m.o.'s with everybody. The word grabass was invented to describe this party.

Ron and Robin butt heads in the kitchen. She talks so much! She asks so many questions. Why is cocaine allowed on this show? "What do you think about the greens? It's funny that what you are saying reminds of me of a long story I wanted to tell about my dad, but first here is everything I think about racism." Ron says to the camera, "Do Robin and I make a good pair? I take the fifth." What he means here is that if he were to answer he could go to jail, so his answer was probably going to be "working with Robin reminds me of the time I strangled a man and got away with it."

Everything is pretty solemn and fancy at the Judges table. Everyone seems to be wearing black or gold or purple and I feel like they are about to choose the new Pope. Why does everyone talk to Joel Robuchon like he's a child prince? Padma actually purrs at one point, "Did they please you?" Am I watching Indiana Jones and the Temple of Doom? What is going on? Somebody stab him in the heart before he kills Short Round.

Surprisingly, the judges and chefs seem mostly happy with the meal. They comment that they could never have gotten a meal that good that early in the show any other season. Take that, previous chefpetitors.

Their favorites for this Elimination are Bryan and Mike, who made a trout with deconstructed bernaise, and Michael and Jennifer, who made rabbit. Bro against bro, once again. Mike seems to take a little too much credit for his bernaise, which Bryan walked him through, but it all works out when Bryan wins again. What an honor! His prize is getting to be Joel Robuchon's employee for a week. Congrats?

The losers are Mattin and Ashley's baby chicken in velvet gravy, because I don't have time to look up spellings, and Hector and Ash, who made filet mignon. All of it seemed pretty bad, but Hector absolutely mangled the cooking time and the butchering of the meat. What else is there? For him, nothing. He's going home.
—Max Silvestri