Welcome back to Dining On A Dime a bi-weekly feature in which Lizbeth Scordo surveys LA's cheap eats—often obscure, ethnic, unsung restaurants—proving that dining on a dime is alive, well, and quite tasty in this here city. Where do you think she should go next? Drop us a line. 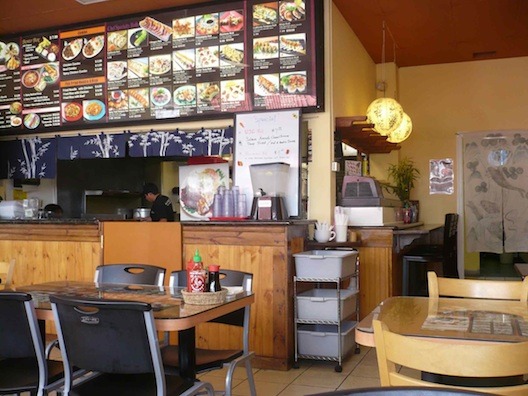 Los Angeles is blessed with some top-notch sushi joints, but the most legendary of those will cost you big time with Omakase menus consisting of dozens of exquisite courses spread out over multiple glorious hours for hundreds of dollars. Then there are those ubiquitous trendy spots, where pretty people toss back fruity martinis and $20 “special” rolls bursting with combinations of sauces and shellfish, stuff the purists shake their heads at. Either way, great sushi, however you like it, can be pricey.

So what can you find on the cheap? Good sushi? Decent sushi? Worse? I wanted to find out when I stopped in for lunch at Sushi Delight, an order-at-the-counter storefront in a horseshoe-shaped strip mall near USC, and a place that looked about as cheap as it gets.

Rolls start at $3.99 (for a California roll with imitation crab) and top out at $10.99, with the average roll costing around $7 or $8, not the super bargain basement prices I thought they’d be (especially considering a very good spicy tuna roll I get from my favorite neighborhood place is $7), but the rolls all look rather large, each coming with eight or ten hefty cut pieces. Nigiri prices are low, just $2.99, but the choices are limited, only tuna, albacore, salmon, shrimp, or eel. And, at $7.99, the bento box, which includes chicken or beef, shrimp tempura, salad and rice seems like an OK deal, I guess.

I notice two things right away. First, almost no one else is here, despite the fact it’s lunchtime on a weekday. I ask the friendly woman at the counter about the customer base and she says the place gets mostly college students, and they do a lot of takeout and delivery to nearby apartments and dorms. They also have a full-service location in Lomita. She assumes I want my order to go, but I tell her I’m going to eat in today, and I take a seat in the restaurant, which has Christian rock piping through the speakers. There are posters of glistening fish and bubbling soup on the walls, and every table has to-go menus displayed under glass, just to tempt you into ordering more, I suppose. And there actually is a tiny sushi bar adjacent to the counter, behind which I see the chef cutting and rolling. Another cook is back in the kitchen working a few sizzling pans on the stove, which probably means they really are prepping delivery or takeout orders, though only one person comes in for pick-up while I’m there.

The other observation: Lots of the rolls on the menu involve a deep fryer. The King Kong includes crab, spicy tuna and shrimp tempura, the Ninja comes with fried salmon, There’s a deep-fried spicy tuna roll, a deep-fried California roll and even the day’s special, the USC roll, is made up of a variety of fish all plunged into the fryer. Not a great sign, but maybe that’s what the college kids are into these days.

My $11.99 combo plate – which comes with eight pieces of sushi split between tuna, eel, salmon, and albacore, along with a 10-piece cut spicy tuna roll (I’ve substituted tuna for the shrimp tempura that’s supposed to come with the combo) – is probably enough for two people. And if I had a dining partner to split it with, it would be a true bargain at $6 a person. But I don’t, so it’s not ? especially considering the quality of each of the components varies wildly. And I mean wildly.

THE GOOD: The two hearty pieces of salmon sushi have a mild flavor, aren’t fishy, and have a nice texture. It’s the kind of salmon I’d expect from any good sushi place. I eat all of it.

THE BAD: The eel sushi is mushy, falling apart, and doused in an unimpressive sauce. I leave most of it on the plate.

THE UGLY: The anemic-looking pieces of tuna taste, oddly, like soap. I take one bite and then another a few minutes later to make sure I was right the first time. I was.

THE AVERAGE: The fish in the spicy tuna roll is good enough, maybe because it’s been mashed and mixed to oblivion, but the cucumber slices are limp and the avocado is completely flavorless. I eat a couple of pieces.

THE SURPISINGLY EXCELLENT: The slightly seared albacore is the saving grace here. With a dusting of red and black pepper on the edges, it’s buttery with a hint of smokiness. It’s the one and only truly outstanding item in the bunch and I devour it. At $2.99 for an a la carte order, which includes two pieces, I guess I’ve finally found that bargain. But I went through a lot to get to it.

So overall, a failed experiment. If you happen to be in the neighborhood and want a quick piece of seared albacore, go ahead. Throw in an order of salmon sushi while you’re at it, and you’ll be out the door with some decent fish for about six bucks. Was I there on off day? Maybe. Could there be other gems on the menu, hidden amongst the duds? Possibly. But I don’t think I’ll be back to find out.