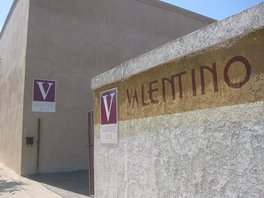 Seems like SIV is shocked at her own review but a full three stars today go out to Valentino and a special high five for newish chef "Nicola Chessa, who took over in January, [and] is cooking some of the best food...at Valentino in years." Interestingly Sher reveals that she's not an anonymous critic at Valentino since she had the owner " as an interview source long before [she] ever thought about becoming a restaurant critic" however she goes on to say that "I did, though, make all of my reservations under other names in order to put off recognition as long as possible." As for food she's pretty much smitten by it all, but "pasta is where Chessa shines. His cooking is understated and very Italian, lightly sauced, lightly seasoned." Word of advice, go for the tasting menu "...which has always been the best strategy at Valentino." SIV's parting words? "Now I once again look forward to going to Valentino. With Chessa heading up the kitchen and Selvaggio in good form, the flagship has got its groove back." [LAT]

2) Pa-Ord Noodle: Here, "It comes down to the boat noodles, submerged in a deep, slightly tart broth tinted chocolate-brown with its thickener of ground pork blood, garnished with scallions and skinny strips of tripe and slivers of beef, also with slablets of liver if your tastes run that way, which I admit mine sometimes do not. You will find crunchy bits of pork rind, crumbled right out of the bag into the soup. It is a nourishing dish, complex and filling...If you're not in the mood for noodles at Pa-Ord, you're probably out of luck." [LAW]