Share All sharing options for: Lidia's Pupusas in Venice

Welcome back to Dining On A Dime a bi-weekly feature in which Lizbeth Scordo surveys LA's cheap eats—often obscure, ethnic, unsung restaurants—proving that dining on a dime is alive, well, and quite tasty in this here city. Where do you think she should go next? Drop us a line. 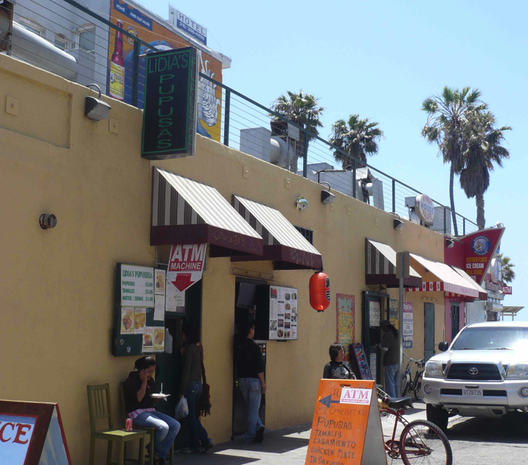 Venice gets a lot of culinary props these days, but most of the accolades center around of-the-moment pricey eateries and the ever-multiplying food trucks along Abbot Kinney, a good mile inland from the Venice shown on TV and described in travel guides, the love-it-or-hate-it Venice Boardwalk. Tourists flock to this stretch of beachfront to see wildly entertaining street performers, watch bodybuilders pumping iron under the sun, spend their traveler's checks at ramshackle stands, or just stare off at the sea. But, nobody really goes there for the food. Or so I thought. Just steps from the boardwalk lies Lidia's Pupusas with a kitchen the size of a postage stamp and a take-out window you could easily walk by and never notice. This hole in the wall quietly serves up a truly amazing meal for a few bucks, smack in the middle of it all.

Owner Vito (who named the place after his daughter Lidia) greets me when I walk up to the window. He's from El Salvador, the country that invented the pupusa, a thick tortilla made of corn flour and stuffed with everything from cheese to pork to loroco, a flower similar to a squash blossom. The tortillas are then served with a tomato-based sauce alongside a pickled coleslaw.

Vito and his wife, Ada, opened Lidia's three years ago, after getting an intense course in pupusa-making from his grandmother. Despite the spot's proximity to visiting vacationers, the eatery's bread and butter comes from local residents, especially those who've moved here from Central America.

Based on his recommendation, ("One is a snack, two is a meal!") I order two pupsas at $2 each — one chicken and cheese with mild sauce, and the other loroco and cheese with hot sauce. About seven minutes later (the pupusas are grilled to order), what comes out is quite a meal, for sure.

The giant tortillas have a touch of sweetnees, are crispy and browned on the outside, fluffy inside and they're oozing with mozzarella cheese (Vito says they use a local, homemade cheese in El Salvador, but it's too tough to get it sent here). The chicken version is stuffed with lots of flavorful shredded meat, carrots and diced green peppers. And though I enjoy the loroco pupusa too, it seems a bit skimpy, with just the cheese and tiny pieces of diced blossoms, especially compared to the chicken pupusa. (Vito did tell me I could add beans to the loroco, which I'll do next time.)

The smooth, tomato-based mild sauce has a nice kick, but the hot sauce, made from chiles and flecked with fiery seeds, is so outrageously hot, I only use a tiny dash, though I know lots of hotter-the-better-hot-sauce fanatics who'll happily slather it on. Though a scorching sauce like that isn't traditionally served with pupusas, says Vito, he's got a lot of customers from Mexico who demand that hellish heat. Lidia's makes both sauces from scratch.

The pickled slaw, reminiscent of a Korean kimchi slaw, cools the pupusas down a bit and the bright pieces of fresh sage tossed in are a nice surprise. For $4, you just can't beat it (make it $5 if you want to throw in a soda or water). Most of the customers here come for takeout, and it's clear why: Seating consists of just two chairs, and the tiny nearby table actually belongs to the sushi spot next door. But, luckily, there's plenty of available seating right over there on the sand, with a front-row view of the ocean. And isn't that the reason the tourists come here in the first place?
Pupusas; $2 each
323-209-7316
—Lizbeth Scordo