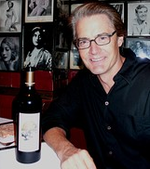 Actor Kyle MacLachlan, also known as Dr. Trey MacDougal in Sex & The City, is a big time foodie. And, apparently oenophile, according to LAT. MacLachlan has been producing wine since 2005 with Eric Dunham of Dunham Cellars in Walla Walla, Washington and their first vintage was even awarded a 91 by Wine Spectator. Catch the man in action this Saturday, he will pour his Syrah and not yet released 2008 Pursued by Bear at Wally's Wine & Spirits (Westwood Blvd) from 2-4PM. [LAT]