Share All sharing options for: Andrew Adams Discusses One Successful Year at Cleo

Welcome to One Year In, a feature in which Eater sits down for a chat with the chefs and operators of restaurants celebrating their one year anniversary. 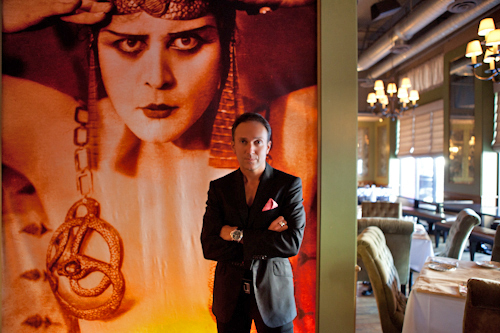 Last September, ever expanding hospitality juggernaut sbe opened Cleo, its curiously anticipated bohemian Middle Eastern concept within the new Redbury hotel. After years of launching big splashy restaurants frequented more for the scene than savory or sweet, sbe chose a slightly more rustic, less glossy path and focused its efforts on food. Cleo was born, and since its inception has remained buzzy as ever. In fact, the more casual small plate approach has proven so successful that sbe just recently launched Mercato di Vetro, which has been described as an Italian version of Cleo. And, with The Redbury headed to Manhattan, plans for a second Cleo are already under way. Here now General Manager Andrew Adams who has been on board since day one. According to him the last year has been smooth sailing through and through.

How did the opening go? The opening was excellent and like all sbe openings, an outstanding party. Since we had been open for about a month before the official Grand Opening and had gained some momentum, we had a lot people clamoring to get in.

Did you make and changes after opening? None! This was one of our most successful openings and really exceeded even our own expectations.

Six month in, what has changed? We really noticed that we had developed a connection with the local community and began to see our repeat clientele coming in two and three nights a week. It was also about that time that we began to receive national recognition.

What was the review process like? To be honest, it was incredible. The response from media and food writers was overwhelmingly positive.

How did the LAT review affect business? It added another layer of legitimacy and validated what we knew was a great new concept. It also created a heightened level of awareness as far as a broader audience of people who had never heard of Cleo or the type of cuisine we offer.

Did you make any changes after the review? No, it was a great review and we were receiving such positive feedback across the board that we were confident in the concept.

What have you learned about Middle Eastern cuisine over the last year? That there’s a vast variety of cuisines and that Chef Danny’s innate talent of blending them so brilliantly is undeniable.

Do most diners understand the menu when they come in? It depends on how familiar you are with Middle Eastern cuisine. For some, we like to give a brief overview, and for others they just dive right in.

How is business these days? Still great. We couldn’t be more pleased.

What is your favorite thing on the menu right now? Lamb shank. Since we added that last month it has taken me over.
·All One Year In Coverage [~ELA~]