Share All sharing options for: Friends of Eater Name Top Restaurant Standbys of 2011

As is the tradition at Eater, our closeout of the year is a survey of friends, industry types, bloggers, and readers. We've already covered Top Newcomers. Now it's time for Top Standbys. 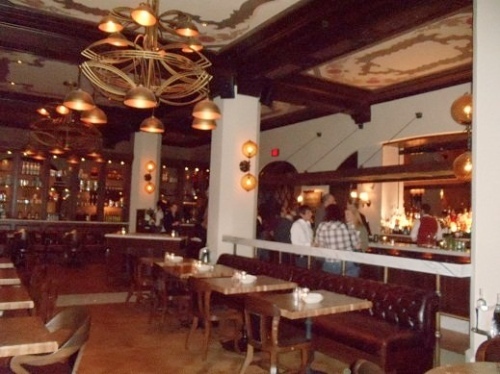 [Public Kitchen & Bar inside the Roosevelt.]

Wolfgang Puck: Obviously, I spend a lot of time in my restaurants, especially with all of the new openings in 2011, such as CUT London and Wolfgang Puck at Hotel Bel-Air. When I'm in LA, I'm always at Chinois, CUT and Spago, whether it's in the kitchen or to entertain guests. When I'm not at my own restaurants, I always visit Matsuhisa, Angelini and Valentino.

Lonny Pugh, LA editor, Urban Daddy: I live in and love Los Feliz. So when I'm not out trying somewhere new I can often be found at Little Dom's, Speranza, Berlin Currywurst (a new favorite), Forage or pretending Covell's charcuterie plate counts as dinner. I'm also firmly in favor of stalking food trucks at Barnsdall Art Park. Since we're talking about LA, I'll assume that counts as going to a restaurant.

Josh Lurie, Food GPS: Aside from all the Armenian flatbread places I hit in east Hollywood for breakfast, and Scoops Westside for coffee and ice cream? The Tasting Kitchen is a touchstone for seasonal Cal-Med-Italian cooking, a buzz-worthy vibe and great cocktails. Zam Zam Market in Culver City was a place I hit a few times for flavorful Pakistani food that should probably never travel in a car, or at least a car that has closed windows. Dino’s Burgers #2 is another semi-regular stop for pollo maniaco, and they even remodeled in 2011. Fancy. Flor de Yucatan also had a recurring role in my life lately, for big portions of Yucatecan food, with many dishes involving pork, at ridiculously low prices.

Jeff Miller, LA editor, Thrillist: I'm totally an Angeleno in that I stay in my neighborhood most of the time, so for that I thank Robata Jinya for opening walking distance from me. Not only is it the best ramen in my hood, it's some of the best ramen in LA -- and that's not even acknowledging the chicken meatballs, or the seared yellowtail. It's also got one of the greatest lunch specials in the city: $11 literally stuffs you. I'm there enough that I jokingly say to the server "see you tomorrow" as I leave -- and sometimes, I do! I also gotta give props to the Izakaya on 3rd, which has the best sushi special I've seen at a higher-end sushi spot: $12.50 gets you a monster-sized chirashi with ultra-fresh fish, as well as miso and salad. Respec'.