As is the tradition at Eater, our closeout of the year is a survey of friends, industry types, bloggers, and readers. We've already covered Top Newcomers and Top Standbys. Now it's time for Best Dining Neighborhood. Readers, please add your thoughts to the comments. 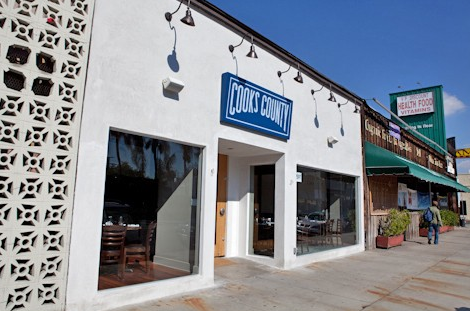 Q: What was the best dining neighborhood NY in 2011?

Lesley Barger Suter, dine editor, LAmag: This is a toughie, but I might say Beverly Boulevard. Playa, Cooks County, Eva, not to mention the classic Angelini, Shaky Alibi waffles, ice-cream from Milk, pastries at Susina. That street is reaching critical mass.

Jeff Miller, LA editor, Thrillist: I still gotta go with the unidentifiable 3rd street/Beverly/Melrose hood that's not quite Hollywood or Beverly Hills and not-quite-not. There are a wealth of options for everything from casual cafes (I'm looking at you, Doughboys!) to high-end places to impress, like Hatfield's. Downtown may be a bit more cutting edge, and K-town may have the most worthwhile stop-bys per square mile, but for the diversity of options, mid-city for sure.

Lonny Pugh, LA editor, Urban Daddy: Aside from my own, I'm sort of partial to Downtown/Little Tokyo these days.

Wolfgang Puck: Venice, which has many small restaurants run by young, exciting chefs.

Lindsay William-Ross, LAist: I'm going to give it up for Hollywood. It is really becoming a great place to go for food, and you can get there by Red Line, and there's lots to see and do. I'm keeping my eye on Echo Park for next year. I say all this with the caveat that I rarely make it West of the 405. I'm not a jerk about it, I just don't make it over there as often!

Josh Lurie, Food GPS: Koreatown is clearly the neighborhood with the most interesting food and biggest range at this point, including charcoal grilled meat and seafood, stews, noodles and more. The San Gabriel Valley is also pretty great, but it’s so widespread that no single neighborhood stands out as much as Koreatown.

Kat Odell, editor, Eater LA: SGV for Chinese. Third Street (Mid-City) blew up in the past year and a half. There are SO many dining options within close proximity, both new and old, from the inception of Olio to Jinya to simplethings to Son of a Gun, Il Covo, and now The Churchill. Only more to come, too.