Share All sharing options for: Burger Pairings From Drink Masters Around Town 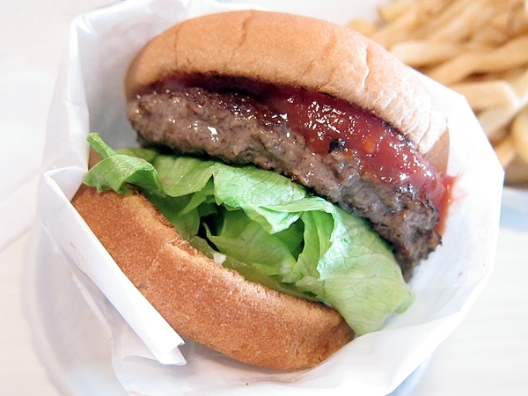 Aaron Sherman, Beverage Director, the SLS Hotel: 2009 Coturri Rosé – The Coturri family has been making wine in California since the late 19th century and has led the pack in natural winemaking for the last 50 years; taking a completely non-interventionist approach in the vineyard and winery. Although showing some bright red fruit, this Rosé, comprised of 100% Merlot, is truly defined by its savory qualities, impressive depth, and focused acidity that will all hold up to the bold flavors in The Apple Pan’s classic burger.

Josh Goldman, Sommelier, Ink.: 2007 Felsina Chianti Classico Riserva "Rancia" – This burger needs a young, fruity wine that won't be over powered by the tangy hickory sauce. This sangiovese drinks young and leads with bright cherry and plum playing off of the meaty burger and tangy woody hickory with some great acidity that cuts through the cheese and mayonnaise.

Caleb Wines, Co-Owner, Corkbar: An old school burger needs a sturdy old vine Zinfandel to go with it. The old vine Zins have a concentrated fruity backbone, but also notes of pepper and spice that make it a great pair with the classic hickory burger served at Apple Pan.

Eric Espuny, Sommelier, The Royce: A Medium bodied red wine served slightly chilled. A French Red such as Chinon or Bourgueil From the Loire Valley and /or Any good Beaujolais such as Brouilly and Morgon. These wines are food friendly and pair nicely with the tangy hickory sauce.

Paul Sanguinetti, Sommelier, Ray's and Stark Bar: 2007 Bradford Mountain, Syrah, Grist Vineyard, Dry Creek Valley- The Bradford Mountain Syrah has a nice expression of dark fruit, sweet enough to not be dulled by the hickory sauce, and with a smokiness that plays well off of its tanginess. I always think of Syrah as a natural partner to beef, bbq, and burgers. The Bradford Mountain is cool too, because its small production, family owned and made with organic grapes, so it’s a clean wine as well. 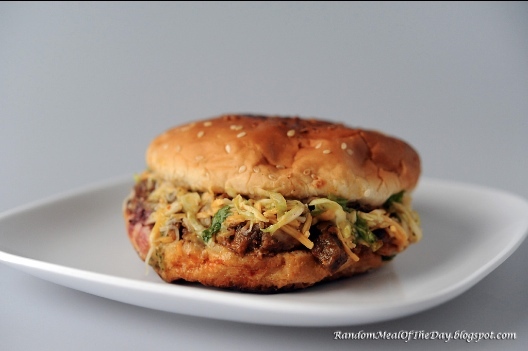 Josh Goldman, Sommelier, Ink.: 2009 Pascal Jolivet Sancerre – The salsa, relish and chicharrones needs the acidity and the lemon, gooseberry fruitiness but the wine is full enough to not get lost in the meat and cheese.

Caleb Wines, Co-Owner, Corkbar: Kogi's burger has complex flavors and a hint of heat. I like a fruity viognier to go with this fusion winner. The viognier is floral, but not too sweet, with mineral notes that complement Kogi's bold burger.

Eric Espuny, Sommelier, The Royce: A Young Rioja or Tuscan Red Wine served slightly chilled is the perfect complement to this burger as they bring out the complex flavors of the cilantro and salsa roja.

Paul Sanguinetti, Sommelier, Ray's and Stark Bar: 2009 D. Ventura, Pena Do Lobo, Mencia, Ribeira Sacra, Spain- Mencia is a really unique grape from Spain that they believe to be of Portuguese origin. Its somewhat like a Spanish version of a Cru Beaujolais, both Pinot Noir and Garnacha like with spice box type aromas of cardamom, blueberry,cherry, and anise. I think this, coupled with the wines vibrant acidity will really compliment the cilantro and sesame, and tame a bit of the salsa rojo. Its also a perfect pork and chicken red wine. D Ventura is non certified organic and the vines are actually chiseled into the mountainside, its pretty wild. 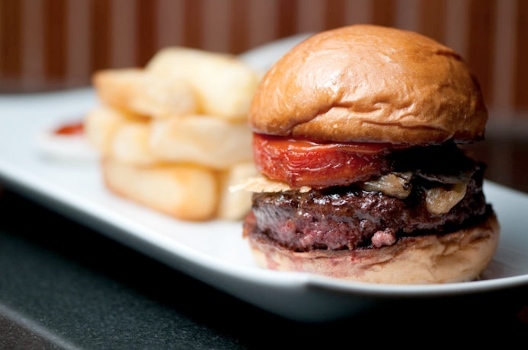 Aaron Sherman, Beverage Director, the SLS Hotel: NV Alvear Oloroso Asuncion – A very traditionally styled wine. The wines from Montilla-Moriles in Spain are sometimes obscured by the grandeur of their neighbors in Jerez, or Sherry. However, the wines from this region, made in a sherry-style and based on the Pedro Ximenez grape are certainly praiseworthy in their own right. The Asuncion carries rich flavors of candied walnut and honey as well as a subtle umami note that fortuitously lends itself to this signature burger.

Josh Goldman, Sommelier, Ink.: 2008 Giacomo Conterno Barbera D'alba Cascina Francia – Some of the best Barberas come from classic producers from Barolo. This one is rich, lush with dried fruits that play off of all the cooked savory components of this burger.

Caleb Wines, Co-Owner, Corkbar: A smoky syrah, or Rhone-style blend is a great choice here. Dark fruit and meaty tannins will go great with the rich flavors of this burger.

Eric Espuny, Sommelier, The Royce: A Napa Cabernet Sauvignon with intense red currant flavors and solid structure pairs well with this burger, bringing out the more complex flavors of the shiitake mushrooms and caramelized onions.

Paul Sanguinetti, Sommelier, Ray's and Stark Bar: 2008 Iberian Remix Red, Tempranillo/Garnacha, Central Coast- The Iberian Remix Red from Central Coast is the first domestic Tempranillo I’ve had that shows true varietal character. Its made by the same winemaker as Laetitia. Tempranillo and hard ages cheeses such as Manchego or Parmesan, in this case, play well off each other, and its notes of dusty plums and cherries and smoke compliment the earthiness of the shitakes. The wine surprisingly almost has a tomato like quality to it as well which I think will match seamlessly with the roasted tomato and ketchup. 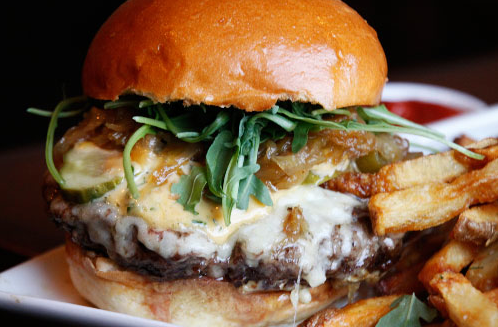 Aaron Sherman, Beverage Director, the SLS Hotel: Russian River Brewing Company Damnation Belgian Style Golden Ale—Coming from one of the most exciting breweries in the country, the Damnation Ale is a mouth filling Golden Ale with tropical fruity notes typical of the style, along with a pointed yet delicate backbone of carbonation and hops. The bitter and herbal quality of the hops will accentuate the remoulade while still holding its ground against the pronounced cheddar and onion fondue. The result is a huge amount of flavor with a refreshing finish that will leave you ready for the next bite.

Josh Goldman, Sommelier, Ink.: NV Bollinger "Special Cuvée" Brut Champagne – Creamy, toasty body with sharp acidity and great fruit that can handle all of the cream and pickles in this burger.

Caleb Wines, Co-Owner, Corkbar: A big cabernet sauvignon, cabernet franc or merlot (or Bordeaux blend) is a solid choice to pair with Rustic Canyon's rich tasting burger. The big tannins common in these varietals will bring out the fruitiness of the wines and showcase the layered flavors of this burger.

Eric Espuny, Sommelier, The Royce: A fairly powerful Paso Robles Zinfandel would complement this burger nicely. The flavors are lush and round with an herb finish.

Paul Sanguinetti, Sommelier, Ray's and Stark Bar: 2007 Demetria Estate, Pantheon, Red Rhone Blend, Santa Ynez- Demetria Estate is one of the highest elevation vineyard sites in Santa Ynez and they specialize in super clean, biodynamic wines. The Pantheon is their Chateauneuf style red blend and even includes a small percentage of the white varietals Viognier, Roussanne, and Grenache Blanc. The wine exhibits classic rhone funk of leather, animal, and mushroom along with dark blackberry and red cherry and licorice. I think these flavors go well with the sweetness of the onion fondue, holds its weight with the beef and sharp cheddar, and goes toe to toe with the herb remoulade. 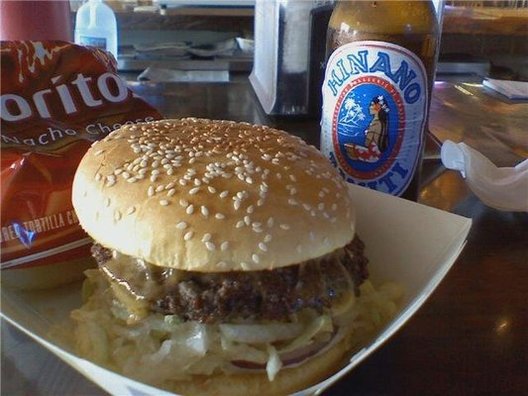 Aaron Sherman, Beverage Director, the SLS Hotel: Brooklyn Brewery Pennant Ale ’55—Garrett Oliver, Brewmaster at Brooklyn Brewery is one of the gurus of American brewing and one of the most outspoken advocates of beer and food pairing. His Pennant Ale is made in the style of a British Pale Ale and brings a hoppy bitterness that is nicely balanced by toasty, biscuity flavors of malt. The subtlety of the beer will not overpower any of the components of this burger, while the bitterness will hold its own against the bright relish and mustard.

Caleb Wine, Co-Owner, Corkbar: I would go with a beer with this one, something light and refreshing like a pilsner. Hey, it's a dive bar burger!

Eric Espuny, Sommelier, The Royce: A Rose or Pink wine from Provence (Tavel) or a Good California Rose are light options to complement the mellow flavors of the burger.

Paul Sanguinetti, Sommelier, Ray's and Stark Bar: 2006 Genuine Risk, Cabernet Sauvignon, Santa Ynez- My first inclination was to lean towards a White Zinfandel. Most of the dive bars I grew up in only carried whatever cheap and unpolished wine the big liquor companies would dump on them and the locals loved it. My second inclination was for a Miller High Life, but in the end I took the high road and had a vision of the classy guy in the dive bar, the guy who’s in a suit minding his business while sweatshirt laden patrons scream at the game on the tv. After all, it is a classier dive bar burger. The 06 Genuine Risk has nice plump black fruit and is a bit peppery, being dry and sweet at the same time and a perfect match for a classic burger. The winemaker lives locally as well and its always nice to support local.