Share All sharing options for: Nguyen Tran of Starry Kitchen

Welcome to One Year In, a feature in which Eater sits down for a chat with the chefs and owners of restaurants celebrating their one year anniversary (plus or minus a few months). 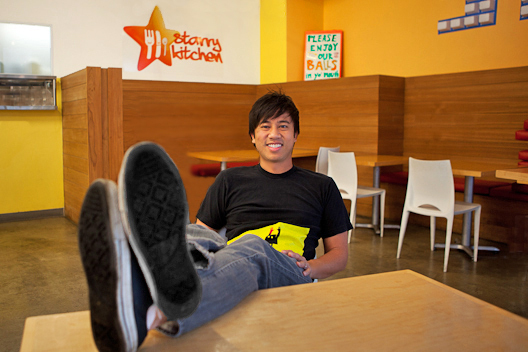 After launching an underground dining club out of their North Hollywood apartment that skyrocketed to the #1 Asian Fusion listing on Yelp (with a perfect five star rating nonetheless), last February, husband and wife duo Nguyen and Thi Tran took a leap of faith, bringing Starry Kitchen, their homespun pan-Asian comfort food concept, to Grand Street Downtown. From green tofu balls to attention-grabbing costumes, Starry Kitchen has earned its niche within the Los Angeles dining sphere, and there's only more to come. We recently sat down with owner Nguyen Tran to chat about the first year of Starry Kitchen and the road ahead.

You used to run Starry Kitchen out of your apartment. How did that come to be? It was a fluke. It was just a fun experiment...gone right! Something we never thought would get us this far by any means. My wife Thi lost her job in advertising back in April of '09, Kogi and the Korean Taco Craze was on the rise, my wife thought a Vietnamese Taco would taste even better (don't worry we told Roy Choi this before, and he's now a friend and was amused... we think!) and thus began the experiment that was/is the "original" illegal and underground Starry Kitchen. The original idea was less like the seemingly growing popularity of underground supperclubs (which are pretty bad ass btw), but more like the illegally delicious home restaurants you'll find in ethnic communities all over and something I personally experienced as a child. Inexpensive, delicious, and just happens to be served out of one's home. So we started this weekly lunch party called "Starry Kitchen" serving a rotating Pan-Asian Comfort food dish (only one dish per party), then after a month it grew to be a bi-weekly (lunch on Sunday, dinner on Wednesday) party and then *POOF* our apartment became the #1 Asian Fusion listing on Yelp in all of Los Angeles at one time and #4 on the top 10 of all 15k listings too. So more people found us and led to nearly 130 people coming in and out of our second floor apartment within a span of three hours for the now infamous Crispy Tofu Balls the last time we did it.

How was the build out? If we were lucky with the rise of Starry Kitchen, we were even luckier on this one. Pretty much no build out for us. Our friend's built a sushi restaurant in '09, opened it, saw their sales decline quickly and called us to see if we could bring in Starry Kitchen. Once we came to an agreement we shut down the sushi restaurant, prayed to a higher being that we could make our concept work in a no-gas all electric induction with no real vent hood kitchen, bought minor equipment here and there, and two weeks later (i.e. quick enough to keep all the health permits and licenses intact) turned it into the legitimate Starry Kitchen.

How is it to work with you wife? I think my opinion would differ from my wife's. Personally, I love it. It's a lot of fun, and so nice to be finally be the workaholic I really am and see my wife and not worry about neglecting her. Before this I worked in independent film, and I would I travel around the world quite often to film festivals which did create a strain our relationship. From the inception out of our apartment, I always saw myself as my wife's coach. She has a real talent to have fun with Asian flavors, and the most fun part of all this is seeing her talent blossom and realized by others as well. We have a long way to go and a lot of ideas to evolve, but we're doing it together and it kind of brings us closer together (when she's not yelling at me for messing up someone's order that is). Some people say (including my wife) "don't work with people you love or are friends with," and I'm gonna call bullshit on that. When you're in the trenches in a small business or start-up, you have to have a real relationship with those you're working so closely with. You need to feel like they have your back, their support, and you need to enjoy those countless hours of time with them. It ain't easy, and being with someone you don't like makes it a lot harder. So being with my wife, for me, makes the countless hours and unpredictable stress a lot more enjoyable.

How did the opening go? I was a total hustler getting people to come in and listen, talking to everyone, slamming the board to explain our menu (which I can't do anymore because I cracked the wall three months after we opened), and eventually evolved my currently infamous with some people (or at least some Yelpers) F*Bomb Spiel! ^_^ We also worked very long hours to create the menu we thought would create the most impact for people. Even though we served from 11AM - 3PM, we were at the restaurant until midnight almost every day for about tho months. Thems some fun and tiring memories there! It was ultimately a very low key opening, and kept it lot more fun that way.

What are some challenges you've encountered along the way? The number one challenge of all is the exorbitant costs of running a restaurant. When they say a restaurant is a "sink hole" that is no joke. It's amazing how quickly money can be spent, and how quickly you need more when you just spent it. We were rookies at running a restaurant, and that also means we didn't understand all the costs that come with it too. In the very beginning I was so focused on trying to build and bring in business, I honestly just ignored most of it and didn't pay attention to all the administrative BS. My mentality was that if this business didn't work and people didn't like it, I didn't really care much about the bills. So that led me to the hustling of as many people as possible into our doors hoping and praying we had a working business. Other challenge: Staff and the staff culture. Only recently have I come to the realization that even though I wanted to have a specific culture internally, I just couldn't force it to happen overnight. I needed to evolve the culture with our staff (along with finding and replacing staff that were willing), and figure out how to make it work. The result of forcing it led to us parting ways with our previous sous and losing two line cooks the very next week, which was one of the most stressful times we've ever encountered since we opened...and that was just two months ago!

How have you adjusted your menu since you first opened? I'm not sure if this is a loaded question or not since...we change our menu every week. The concept has stayed exactly the same (much to my surprise I should add). We weren't sure if a rotating menu would work, but it seems to have worked for us. The only thing that's really changed is that we're more conscious of bringing in entrees and sides that actually "pair" well together rather than just randomly picking dishes that we like.

Six months in, what had changed? Customer expectation, and taking an active approach to manage that expectation with every customer to try to avoid the "Well, this better be good" complex we all have when we hear about a place enough. When we opened, I thought we'd be lucky to have at most two months worth of any media coverage. And after that, I was very willing to work a lot harder to continue that momentum. The luck we had with the press continued much longer than two months. While building awareness, it also started building hype. When I started seeing this, reading about it on Yelp and blogs, that's when we started vetting out how people found out about us and trying to lower those people's expectation (yup, LOWER) so that we could beat the lowered expectations. People discount that too much, but I could see that was starting to hurt us. At six months, we were still around, and I can tell you sure as H-LL wasn't going to let my ship go down. Clearing the one year mark was my fire, and making sure people came back and told other people was key. Otherwise, the food got better too! The great thing about owning your own place: once you figure out how to make something better, you can do it the next day.

How is business these days? It's still great. The lunch business has stabilized and expectedly dropped a tad bit. But the catering business has grown tremendously compared to last year, so I'm not complaining by any means.

How did you team up with Laurent Quenioux? It sounds like a joke, but I tell people that Laurent actually stalked us. We met Laurent months ago at Vertical Wine Bistro, and when I first met him he was telling me about all my crazy antics and how he loved it, so needless to say we became instant friends. Once I read on Eater that he closed down Bistro LQ I was bummed because I never got to go. I called him immediately with the alterior motive to bring his food to SK so I could finally have some, knew all of his fancy friends would be calling too, convinced him that I'm crazier than all of them and my crazy antics could help him out, and promised him I would play techno when he served..and now we have LQ @ SK!

How has your collaboration been received with Laurent? Most people at first were like WTH since we're seemingly on two ends of the culinary spectrum. But, it's been received quite well. Laurent's crazy creativity and penchant for unusual ingredients, his love of techno and my passionate expletive love for presenting his food... has amazingly been received pretty well.

Would you consider inviting other chefs to pop up at SK? Sure! The more the merrier (but only after LQ and he's in for however long he wants to be in). We've actually talked about people guest chefing for lunch too for a long time since we've met and befriended so many different chefs. So who knows?!?!

You mentioned a while back that you wanted to open a second SK. Is that still the plan? Yup! Now that my kitchen is getting in line, it's time to f-ck sh-t up again and sail this ship forward (i.e. yup, W. LA here we TRY to come... if you'll have us that is!!!)
·All Starry Kitchen Coverage [~ELA~]