An Excerpt From The Upcoming Book Banchan Bastards: The Rise of the Renegade Korean-American Chef

Share All sharing options for: An Excerpt From The Upcoming Book Banchan Bastards: The Rise of the Renegade Korean-American Chef

Welcome to Inside The Stoves by Jason Kessler, a writer of words. Each week Kessler will look deep within the soul of food media and come out with fake excerpts from fake books that are absolutely, positively not real. Basically, it's foodie fan fiction. 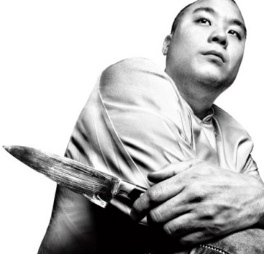 By then, it had been going on for at least three years. The only way to participate was signing up on the Momofuku website a week in advance and hoping you got a spot. Dudes came from all over: Florida, Chicago, LA – hell, one skinny guy even flew in from Pyongyang. Or so he said. That was the point. It didn’t matter where you’re from. It didn’t matter who you were. All that mattered was that you could cook. And fight. The David Chang Fight Club was not a place for the weak.

If you were lucky enough to land a “reservation,” you showed up at Momofuku Ko at 11:45 on Saturday night. Show up late? Get out. Show up early? Get out. Those that showed up right on time whispered to the hostess that they were there for the bulgogi dinner. Two minutes later, the men were led down to a secret prep kitchen in the basement where the shelves were covered in plastic to prevent the splatter from affecting product cost.

The men stewed around silently waiting for the guru to show up. A little past midnight, the time had come. Chang stepped into the kitchen wearing his signature white apron and snap-front shirt. He delicately removed his apron and neatly folded it before placing it inside the bowl of a stand-mixer. He ripped off his shirt like a nonchalant Hulk Hogan, pulling the buttons asunder and flinging it aside. “No shirts. No shoes. No service.” Chang laughed. “Just kidding about the service. You’re all about to get served.” A nervous chuckle rolled through the crowd until the guys saw Chang’s stony face. Then they shut up.

“Choi. Take off the belt. You’re up first.” Roy unbuckled his belt and slid it off. He kissed the buckle that said “Papi Chulo” in gold block letters and threw it into the corner. This was Roy’s third battle. He needed stitches after the first one, but came home with two extra teeth after the second -- souvenirs that he now wore on a necklace. Sorry about that, Sang Yoon. Choi never liked his no-ketchup policy anyway.

Chang pointed to a wiry guy in the corner and called him forward. Akira Back. “The Back Widow.” A legend in the DCFC. He flew in weekly from Vegas and had only lost once. This was going to be good.

“You know the rules.” Chang growled, “You talk, you get sriracha’d. I decide who wins. Any questions?”

The assembled mass shook their heads, almost in unison.

David Chang smiled that half-stoner, half-criminal-mastermind grin of his. “Good. Now let’s get messy.”
·All Inside The Stoves Coverage [~ELA~]
— Jason Kessler

*Jason Kessler writes The Nitpicker column for BonAppetit.com as well as "Heart Attack" for FoodRepublic.com. He also writes things for television.

Newcomer Loquat Is Brewing the Future of Coffee in Cypress Park