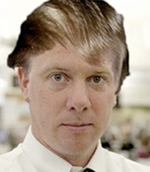 It's no surprise that NY Times critic Sam Sifton is a fan of French chef Ludo Lefebvre, last year he sang words of praise to the chef after dining at LudoBites 5.0. Now, Food Republic publishes an article in which Ludo's wife, Krissy Lefebvre, describes the subterfuge employed by Sify to gain a table at LudoBites 007: "The funniest part of the story with him was he had gone through three people to get a table. [Sifton] was supposed to be some high-ranking person at Chase. The person who got it for him told us he was this big-time person who we needed to know if we were ever going to open a restaurant in New York...we told them that for a table of four people they should order the whole menu — 12 or 13 dishes. So they get through the savory courses and I bring them the cheese plate and he says he can’t do the cheese plate or dessert. And I ask him why and he said he was full. And I tell him he’s a wimp." [Food Republic via Eater NY]