An Excerpt From The Upcoming Book, Curtis Stone is Alone

Share All sharing options for: An Excerpt From The Upcoming Book, Curtis Stone is Alone

Welcome to Inside The Stoves by Jason Kessler, a writer of words. Each week Kessler will look deep within the soul of food media and come out with fake excerpts from fake books that are absolutely, positively not real. Basically, it's foodie fan fiction. 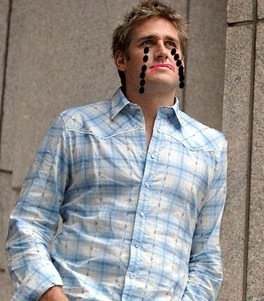 Curtis Stone stood at the great marble island in the middle of his Hollywood Hills bungalow, still in chef’s whites and the navy pinstriped apron he hadn’t taken off for two weeks.

“More hamachi, Mary Sue?” He offered her a massive plate of raw yellowtail, but she didn’t accept. That’s because she was just a balloon tied to a chair. Her warm familiar smile was drawn on with a Sharpie. The same goes for Balloon Floyd Cardoz (brown balloon) and Balloon Traci Des Jardins (small).

Curtis set the fish down and walked over to Balloon Floyd. “Hey there, Mate!” He pulled him in for a manly hug. Just as he was going to give him a good ol’ Aussie bro kiss, though, Floyd popped. Curtis whelped in surprise. It was happening again. His friends were all leaving him, one by one. He ran his hands through his once-perfectly fauxhawked surfer-meets-club kid hair. By now it had become a flattened mess. Note to self, he thought, pick up another pomade endorsement as soon as possible.

The phone rang. Curtis looked at the Caller ID and sank to the ground. The display read “Jamawn Woods – Missed Calls (17).” The Soul Daddy himself had been trying to make sweet potato salad out of Curtis ever since Curtis led the charge to close two of his three promised locations. “IT’S NOT MY FAULT YOU LISTENED TO BOBBY FLAY ABOUT THE CHICKEN,” he yelled at his phone before launching it across the room. It smashed against his surfboard knife rack. Curtis reached up and grabbed some yellowtail from the plate and started smacking himself on the forehead in penance. The yuzu vinaigrette ran down the bridge of his nose like bright, acidic tears. Everything was falling apart and there was only one person who could make it better.

He lunged across his floor, praying to Mick, the Australian God of Luck, that his phone would still work. The screen was cracked, but he could still dial and dial he did. The ringing calmed his pounding heart and slowed the real tears that had started to flow and mix with the vinaigrette – in a different circumstance, Curtis would call the combination “oversalted.” When he heard the voice on the other end, it felt like he had won $25,000 furnished by Terlato Wines.

“Padma,” he whimpered, “will you come over?”
— Jason Kessler

*Jason Kessler writes The Nitpicker column for BonAppetit.com as well as "Heart Attack" for FoodRepublic.com. He also writes things for television.