Welcome to One Year In, a feature in which Eater sits down for a chat with the chefs and owners of restaurants celebrating their one year anniversary (plus or minus a few months). 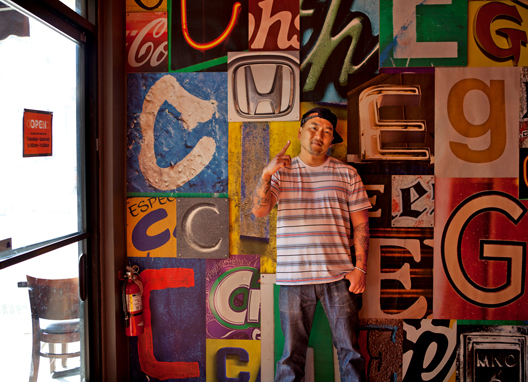 If you've tried but one food truck in Los Angeles, chances are it's Kogi BBQ, a street-mobile that launched in 2008 slinging a mixed batch of Korean and Mexican flavors at a relatively approachable price point. Using the wings of Twitter and the power of the blogosphere, Kogi chef Roy Choi earned a quick following for his kimchi quesadillas and short rib tacos and - in what seemed like an overnight success story - Kogi skyrocketed to one of Los Angeles' most widely discussed food vendors, launching Choi to rock star chef status.

In 2010 Choi was awarded the coveted title of "Best New Chef" by Food & Wine magazine, the first time a food truck cook was bestowed with that honor. So, it's no surprise that close to three years since the inception of Kogi, also in 2010, Choi finally decided to open a restaurant without wheels. Chego, a cramped, brightly colored rice bowl nook in a West LA strip mall. After over a year of biz, we decided to catch up with the prolific chef about his first year in and the (east side) road ahead.

How did you come up with the Chego concept? The concept of Chego came to me when I saw the space. And it was the exact same thing that happened with A-Frame. As soon as I walked in the space, the space used to be a rice bowl restaurant... I started to think about what I ate growing up and what I had in my refrigerator at home. Rice, soy sauce, fish guts, kimchi. Growing up, when I went home after school, I had all that in my refrigerator, I would just dumped it in a bowl and mix it all up and had something to eat. Chego is kinda like a shout-out to growing up as an Asian-American.

How did the build-out go? Well, we didn't have too much money. We saved nickels and pennies... we did what we normally do which is reach out to the people. We reached out to friends, a few came on board, we did a lot ourselves. We spent about $5,000 on the design. We also blogged everybody and asked them to bring in knickknacks. We wanted this to be a place people could come and chill. To backtrack a little bit, our whole essence and soul in creating Chego was to honor that hole-in-the-wall Korean spot. Because that's where we came from. So it was okay if things were a little bit out of order. We were cool with stuff being outside, boxes being stacked.

Did you bring aboard any people from Kogi? Yeah, our sous chef started at Kogi and moved over to Chego. Since Chego is a different company than Kogi, a lot of cousins of guys that worked at Kogi came over. A lot of women who worked at Kogi would get pregnant. [Laughs] I'm serious. And so, you know, working on the truck is tight quarters, so they would want to come over to Chego.

How was the opening? It was a crazy week. I had just come back from New York. The whole project was about three or four months... coming up with the logo, going over the design. But the physical part of it was about a month, a month and a half. The food part was only about two weeks. Food has been coming to me very quickly lately, before Kogi it used to come a lot slower, it's almost as if time has been compressed. At Beechwood I can come up with like 15 dishes in one day. Right now things are just moving faster, flavors are just coming out of me faster than ever. At Chego the dishes were coming out of me really fast. I just knew the menu right off the bat. I saw the whole place before it even existed. I saw the whole place in my mind. The bustling, the elbows, I saw the bowls, these steaming delicious bowls with layers of flavor. I had everything ready, and then I had to leave for New York for the Food & Wine thing. The day we flew back, which was April 7, we went straight from LAX to Chego and opened. It was crazy.

How do you think the success of Kogi has affected Chego? Well, maybe the people that read Eater saw the connection, but a lot of people from Diamond Bar or OC or South Bay don't make the connection. A lot of the time when I was in the line talking to people they had no idea Chego was related to Kogi and we did that on purpose. We didn't want to ride on the coattails of Kogi. We wanted Chego to stand on its own.

Is Chego a concept that you would ever want to expand elsewhere in LA or in other parts of the country? If anybody knows me by now I have the biggest food concept that ever hit in the last 10 years and I don't even know how to reproduce it. If Kogi had fallen into the hands of anyone else, you would probably be seeing bottled sauces and that kind of stuff, but I'm not that kind of guy. So, do I think Kogi and Chego could be all throughout the world? Yeah, we blow it up. I don't care what anyone says, if we had a stand in Union Square that shit would be packed. But... I am learning how to be a business man. That's my relationship with Dave [Reiss]. I get weirded out when people start negotiating with me or expecting things or people start talking numbers... I dunno. But at the same time it's getting so big it's getting to be a little too much work. We can't do it like this forever. We're reaching a threshold of "what do we do?" One way is to stop growing. That's one way to go and there's nothing wrong with that. And then the other way is to expand and take investors, but we're not there yet. And this year is a big year for us to try and figure that out. So next year when you talk to me and we only have one stand, you'll know the direction we picked.

What changed six months in? We changed the seating. We originally started with particleboard tables and chairs we only had seven or 10 tables. It was getting too crazy because the line.. everybody comes to Chego in groups. We added long benches for communal dining. One other thing that changed was the menu grew. We added a bowl, one or two more appetizers, and specials...

How is business now? Chego is good. Chego is steady as she goes. Chego does as much as it can within its abilities and capacities. We don't have alcohol, we're only open five days a week for dinner, you know I work my ass off and so I need some days off. Otherwise I'll work those days. I need to physically set those limits for myself. It does as much as it can. It's busy from 5:30PM until about 10:30PM and then it starts to trickle off and then we get a lot of people from like Universal or NBC or Paramount, we get a lot of guys that work in production and graphics, we also get a lot of guys on their way to the graveyard shift.

What's more difficult running a food truck or restaurant? I think the principles are the same, but with a restaurant there's just more stuff to worry about. When we opened our food truck, we ran it like a restaurant. But, with a truck we had only like one bill. Other than employee wages and food vendors. But now we pay LADWP, gas... Overall the premise is the same just with more bills and more things to worry about.

What's on tap for the future? I'm thinking about a lot of stuff. Fuck it, I'll put it out there. I'm thinking about a Chego truck, so that we can get Chego food out to the east side at lunch time. Dave and I are thinking about A-Frame on the east side. I would love to put an A-Frame out in Silver Lake or Echo Park. Or somewhere around there or downtown. Dave and I are constantly looking a properties, but then again, I have to see the property. When I get in a property it's almost like it talks to me. There's stuff on Sunset Blvd we're looking at. I wanna go east. I really wanna go east. I know that our food is really approachable and fun and I know that's what the east side is all about. On a bigger scale, for me, is the business side of things. This is a year for me to kinda grow up a little bit and figure this out and become a little bit of a business man and not just a chef.
·All One Year In Coverage [~ELA~]
·All Chego Coverage [~ELA~]