Jerry Baker on The Success and Future of Tinga

Share All sharing options for: Jerry Baker on The Success and Future of Tinga 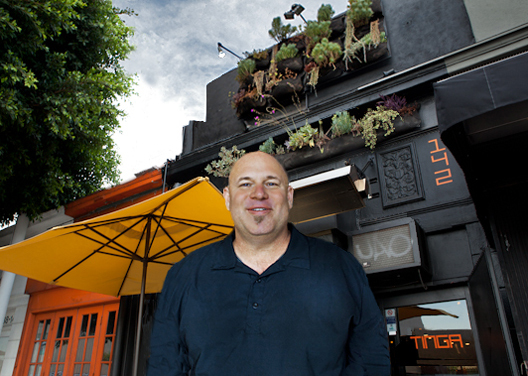 Tinga, a tiny taqueria on La Brea, seemly sprouted overnight, bringing Jonathan Gold-approved cochinita pibil to center city. It has been just over a year of business for owner Jerry Baker who was inspired 28 years ago by a trip to La Super-Rica Taqueria in Santa Barbara. It was then and there that he subconsciously decided that he, one day, needed to open a Mexican taqueria of his own. Over the years Baker catered parties and one day created a La Super-Rica Taqueria-inspired menu for a friend's wedding. The meal was such a success that he started thinking restaurant, and late last summer Tinga materialized. Here now, a chat with Baker on the challenges of his small space, the Tinga food truck, and growth around LA.

For Tinga, was it hard to find the right space? To be honest, I don't know that we did find the right space, there are lots of challenges to our space and we are learning to adapt. Thankfully people dig the food, cause we aint easy to find or park...it started really because we had a great chance to take over a space and be open quickly... which we did and it has been an interesting learning curve for our first space. Didn't really realize how much of a freeway La Brea is 4 til 7... yeesh. I do think La Brea is becoming more and more of a destination. With the redevelopment of the opposite side of the street from us going full bore I think we have lucked into a great locale. The Hatfields folks are opening across the street and another concept is coming in as well. I look forward to having someone else on our block open at night so maybe they look across at our 11.5 foot wide space and wanna come try a taco. So a lot of luck and good fortune for sure.

The concept started off as a catering business, tell me about that. Well, our catering business has been serving tacos for almost 20 years. And not to be cliche, the tacos have always been the hit of the party. A couple of great weddings for guys who have become great friends and we decided to open a taqueria and it sorta quickly morphed into Tinga.

How did you decided to go brick and mortar? I decided I wanted a taqueria when I ate at La Super-Rica Taqueria in 1983. I thought to myself then, I would be a happy guy if I could cook great food like this for people every day. And that was way before I was ever even thinking seriously about the food industry. I was a painting contractor right out of high school and was visiting a buddy at UCSB and that meal, the #16 and the chorizo "fondue" still resonates in my senses. So for sure back in September of 1983, is when I decided to open a place. I think more subconciously than a real light bulb moment.

Did you/have you ever considered a Tinga truck? Yeah we talk about it. I think more as part of Tinga catering than as a day to day operation. I would say it's on the way in the next six months or so.

How did the opening go? Amazingly well. We had so much press when we opened. Good timing, slow news day, whatever, it was great. We were definitely thrown into the weeds and I learned a lot in the first few months!

How is business now? Business is good, considering no booze and 11 and a half feet wide. We are getting our feet under us and in much better control of costs and such.

What's the future or Tinga? Expansion? Yes. Looking for spaces as we speak...or as I write...

What part of the city? Westside and The Valley. We have a large customer base both places that drive in to midtown for us.
·All One Year In Coverage [~ELA~]
·All Tinga Coverage [~ELA~]