Beau Laughlin and Brett Cranston of The Churchill

Share All sharing options for: Beau Laughlin and Brett Cranston of The Churchill 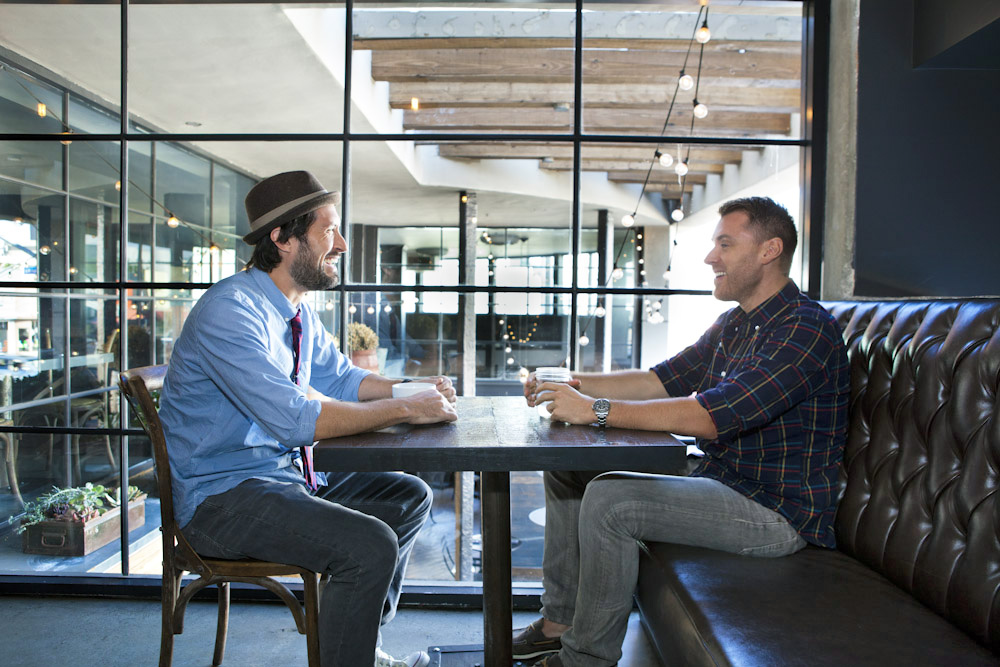 On the first day of operation, The Churchill's opening chef, Jason Tuley, called it quits. Quickly stepping in to replace Tuley, Spencer Johnston helmed the kitchen until this summer, at which point management decided they wanted to elevate the establishment's food and beverage. Mia Sarazen (Harvard & Stone, Black Market) joined the team with a new quality cocktail program, and shortly thereafter, on September 1, Bruce Kalman (Urbano Pizza Bar) began a massive menu retool, introducing farmers market ingredients, house-made charcuterie, and more. Hey, even Bill Clinton wanted to check it out! But, in any event, this is just the start. Management is planning a new evening haunt (old Voyeur), three additional restaurants, and a juice bar. Here now partners Beau Laughlin and Brett Cranston on just how quickly the past year has gone by.

What was the physical buildout like? BC: It was a headache, like any restaurant buildout. We were about two months behind schedule and had to deal with all the 'fun' contract woes, but we got it up and the response has been great.

What was the design process like? BL: We initially had a designer but then decided it was better to do it ourselves. We hit up swap meets and antique shops. We went all the way up to Washington, filled up a uHaul with knick knacks and furniture, and brought it all back. BC: We hit flea markets all the time and get stuff that catches our eye. We go to the Melrose one, Pasadena, and Long Beach, which has most of the same vendors for selling the stuff for half the price.

Did the concept stay the same or did it change? BC: Foodwise, we wanted to make sure that we did everything in house, from scratch. The kitchen is very large, so we started out making our own ice cream, doing pastas, etc. We didn't want the chef to be limited in any way, which is great now that we have a chef in Bruce that hits the Wednesday Farmer's Market in Santa Monica. He has long standing relationships with farmers. Initially we might have been a little bit too ambitious, trying to do too much to make everybody happy.

You've had a number of chef shuffles over the past year, how has it been dealing with that? BL: It's been rough. Our executive chef quit on the first day to be with family, so we had a bit of a false start. It took time to find the right person. Finding Bruce has been great, and people are finally responding positively, seeing how the food fits the context.

What's the biggest challenge been so far? BC: The hardest part has been the hours of operation. Many restaurants get to open just for dinner but we're open at 7 a.m. every day because we're attached to The Orlando Hotel. Because we have a deal with the hotel, we handle the overnight room service and have to accommodate guests with all-day service. But we also have our own frontage on the street, so we can disassociate a little bit. It's the best of both worlds.

What was it like six months in? BC: We'd still been looking for the right fit for a chef, so we were still hunting for something. About eight months in, we found Mia and put in a new cocktail program, which has been crucial for us. BL: We wanted the Churchill to be on par food-wise. We were becoming a little bit of a lounge atmosphere because of the crowd, and that really wasn't our intention. We knew that we had to be patient before finding the right chef that would bring the food up to par.

What's good on the menu right now? BC: For breakfast, I like the poached eggs, prosciutto and burrata. I can live on this dish - it's almost like a benedict without the hollandaise. I'm really excited by all the variety that Bruce has brought to the menu. He's put some lighter options on it, which the neighborhood and regulars have all embraced. The veggie burger is pretty awesome. BL: I love the short rib hash and the eggs. For dinner, I love the charcuterie and gnocchi.

How has the menu changed since opening? BC: We've taken the menu to another level. Bruce does a great job with pork, and it's imbued all over the menu. We're planning on doing a whole pig roast pretty soon. We make charcuterie in house, like duck prosciutto, pancetta, and we pickle everything in-house. BL: The culture in the kitchen is completely different. You can really see and taste the care and attention that comes out of the kitchen. Right now the menu is much more group-friendly, so you can have a group of 5-6 or even up to 20. The plates are all really great for sharing, so everyone can try a bit of everything.

What's new about the beverage program? BL: Mia's menu has really elevated the experience, even offering pairings to dishes. BC: We're trying to get spirits on draft, like Templeton rye. It's something I saw a few years ago in San Francisco and I think no one is doing it at the moment in L.A. We'll also serve wines on tap.

Has it felt like a year? BL: It's flown by. I can't believe it's already been a year. BC: It caught us off guard. We're going to have a large celebration for the one year on October 25. Jason Bentley of KCRW is going to be the DJ.

What's next at this point? BL: We have a ton of projects for the next year, but right now the focus is getting The Churchill to be better than ever. We do have a Downtown spot with completed design and will be ready for the permitting process, though we're still honing in on the concept. We have a nightlife project, two other restaurants, and a juice bar in the works.
·All One Year In Coverage [~ELA~]