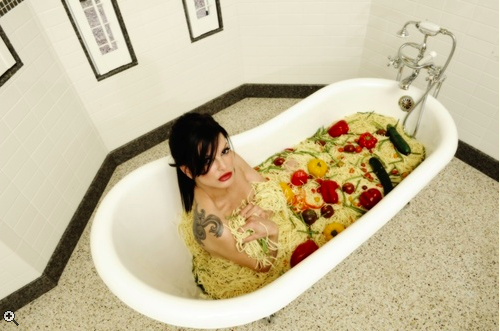 TOWN SQUARE—That lady sitting in a bathtub full of spaghetti is Carla Pellegrino. The upcoming Top Chef: Seattle contestent is to create the menu for Meatball Spot at Town Square. Pellegrino is known elsewhere on the strip for having her name attached to Bacio at the Tropicana. Coincidentally, a day after the chef announced her involvement with Meatball Spot, she dropped Bacio.

THE VENETIAN—Thomas Keller's empire is not yet done expanding. The newest Bouchon Bakery is getting very close to opening near the Venetian's Doge's Palace casino entrance. This is the property's second Bouchon Bakery. The original is still located opposite the newly renamed Venetian Theatre.

NEONOPOLIS—It's almost hard to believe that Heart Attack Grill opened in downtown Las Vegas a year ago. ELV sits down with killer owner Jon Basso to learn how he started Heart Attack Grill and what's different now that it's in LV. Not to miss: that Basso used to own a chain of Jenny Craig storefronts; there's so much cream in his milkshakes that they're practically butter; Basso has actually helped people lose weight.