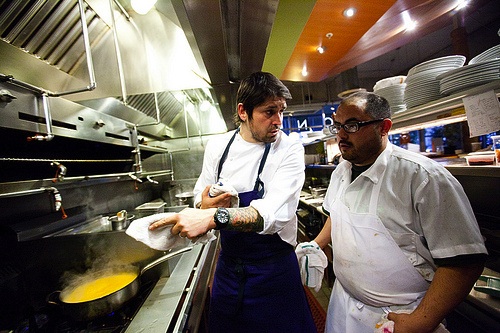 Months ago, Eater shared rumors that chef Ludo Lefebvre, of pop-up phenomenon LudoBites, planned to launch a Los Angeles restaurant with chefs Jon Shook and Vinny Dotolo from Animal and Son of a Gun. Last month, via photo evidence and real estate broker confirmation, Eater revealed the location, and now Eater National catches up with Ludo for additional intel. In the interview, Ludo confirms the Jon/Vinny chef collaboration and states:

"I'm very excited to be with them. They are good friends, and we did some foie gras dinners together, and we just had fun together ... we have the space now, we are in construction. We are still working on the concept. It's going to be a fun restaurant, something new for LA. And something new, maybe something that doesn't exist in America." In other news, look out for a LudoBites 10.0 and possible expansion to Europe.
·Ludo Lefebvre on His Cookbook, LudoBites 10.0, and His Restaurant With Jon Shook & Vinny Dotolo [-EN-]
·Ludo Lefebvre, Jon Shook, and Vinny Dotolo's Trois Mec Coming to Melrose Strip Mall! [~ELA~]